Threads of Remembrance: Quilt in Dallas-Fort Worth

Dallas-Fort Worth Chapter of the NAMES Project

In 1991, the Dallas-Fort Worth Chapter of the NAMES Project was formed. At that time, Texas was ranked 4th in the nation for number of AIDS cases diagnosed and died, and 37th in state funding for AIDS. The individuals who came together to form this chapter saw these troubling statistics and wanted to help their communities through education and funding local AIDS organizations. Within a year of opening, it was clear that a single chapter could not address the needs of these two very different cities with such a physical distance between them. There were also issues with press releases listing Dallas but not Fort Worth, and it was not clear that the Chapter was working with both communities. The Chapter split up into the Dallas Chapter and the Fort Worth/Tarrant County Chapter, and each was established in 1992. After the Chapters separated, they continued to work closely on major programming, such as large displays, or when hosting national tours of the Quilt. 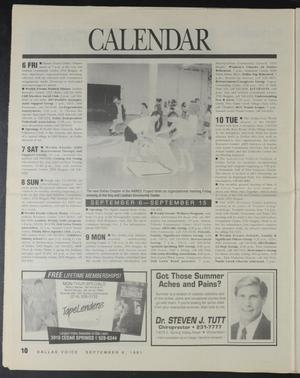 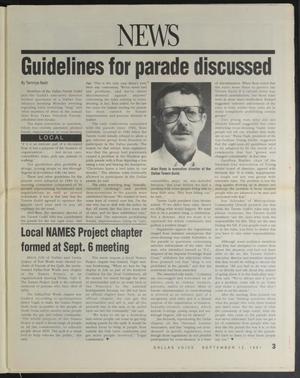 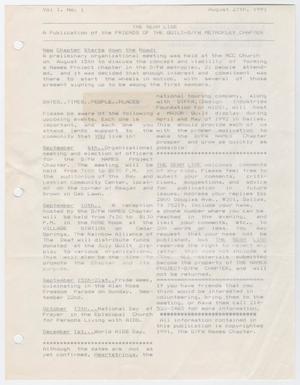 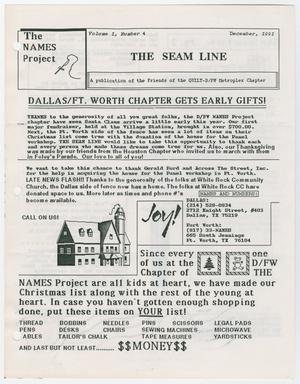 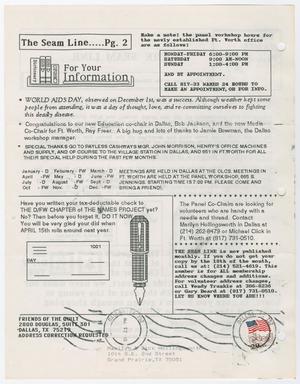 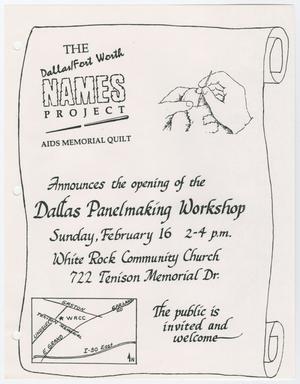 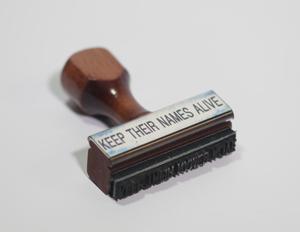 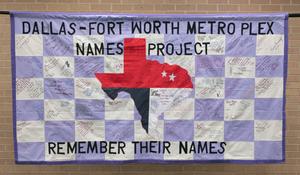 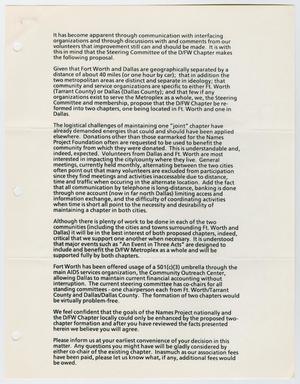 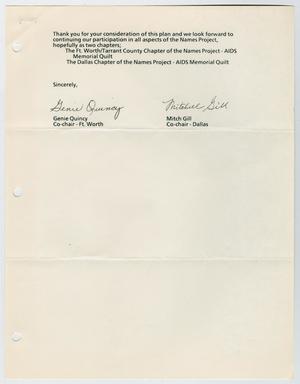 The Dallas Chapter worked under the umbrella of the Foundation for Human Understanding, until it was able to gain non-profit status on its own. The Chapter worked closely with Dallas LGBT organizations, such as the Dallas Gay Alliance, to plan Quilt displays and create educational programming for the community. The Dallas Chapter established a relationship with the White Rock Community Church, early on, where they rented a space for a panelmaking workshop, where community members could seek assistance in creating panels. The Dallas Chapter also committed to publishing a quarterly newsletter, “The Seam Line,” which reported about Chapter meetings and upcoming events, as well as making requests for volunteers and supplies. In 1994-5, the Chapter sponsored major displays of the Quilt at Market Hall, and in 1996, their focus went to the national display in Washington, D.C.

In 1996, the Chapter underwent major changes when the Chapter Chair was asked to resign, by the national office, and many members of the Steering Committee chose to leave at the same time. Over the next year, remaining members worked to fill empty positions and revitalize their organization with new volunteers, more frequent meetings, and a new focus. After this reorganization of the Chapter, they focused their efforts on smaller displays at schools and community centers, in order to better connect with locals, harbor stronger connections for collaborations, and utilize their funds more responsibly.

The Chapter continued with their mission through a difficult time for the national organization, when the NAMES Project Foundation headquarters moved from San Francisco to Atlanta in 2002. During this time, the organization placed greater limits on the Chapters in terms of fundraising and raised costs for Chapters to host Quilt blocks. With this, about ten Chapters nationwide decided to disband. The Dallas Chapter agreed to the new terms in 2002, but the organization only remained in existence through 2003, at which point it disbanded. 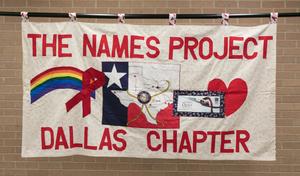 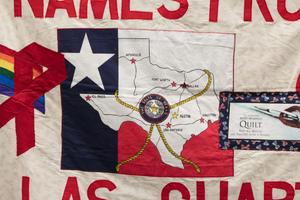 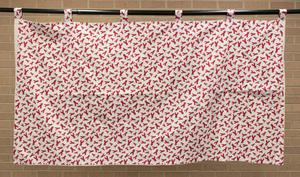 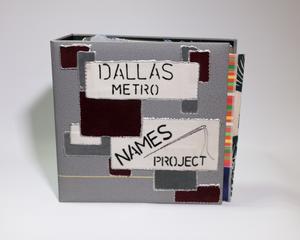 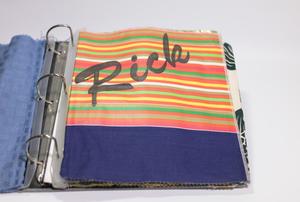 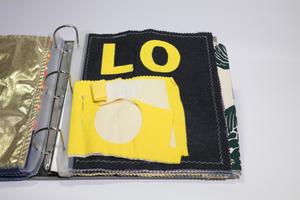 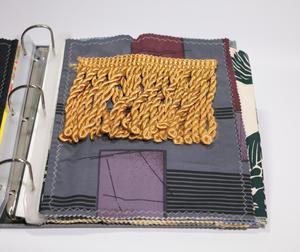 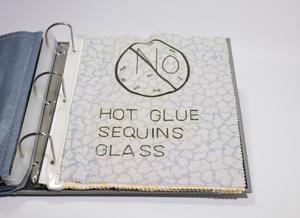 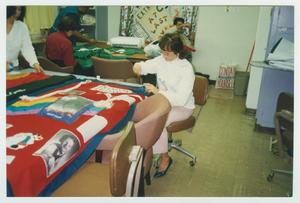 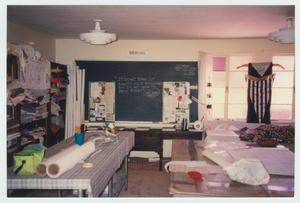 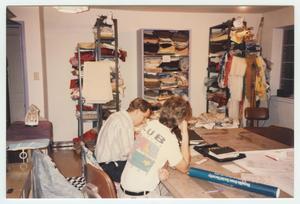 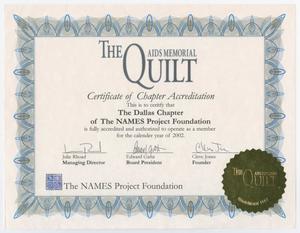 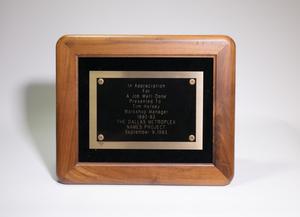 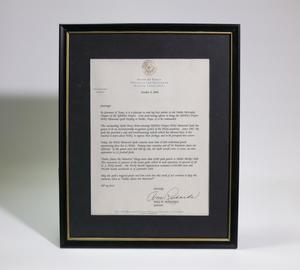 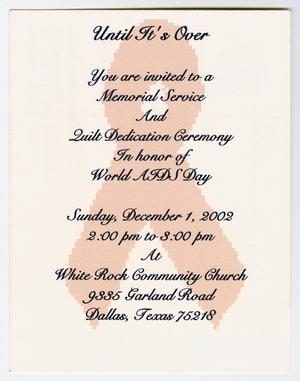 The Fort Worth/Tarrant County Chapter worked under the umbrella of the AIDS Outreach Center for four years, until they were able to gain non-profit status on their own. This allowed the Chapter to establish their place in the community and create strong connections with other AIDS organizations. In 1993, the Chapter was honored with the Chapter of the Year award, after hosting a major display of over 200 12’ x 12’ Quilt blocks at the Will Rogers Exhibit Hall, raising $22,000 for local AIDS services, and bringing in over 100 new panels to be added to the Quilt.

In 1996, the Chapter focused on helping with the display in Washington, D.C. After this major event, the leaders of the Chapter decided to step down from their positions to allow a new steering committee to take over operations. Under new leadership, the Fort Worth Chapter chose to focus on local outreach, presenting educational materials with other local organizations, and attracting more people to panelmaking workshops.

The Fort Worth Chapter was one of many that opted to disband instead of agreeing to new regulations created by the NAMES Project Foundation, in 2002. The Chapter decided that the new limitations on local fundraising and the increased cost to host the large Quilt blocks held at the National headquarters would not allow them to achieve their goals and continue to be a main source of HIV/AIDS education in the community. With this decision, the Chapter closed its doors in 2002. 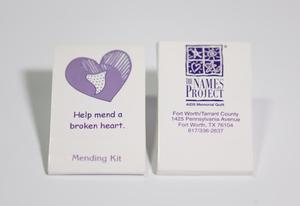 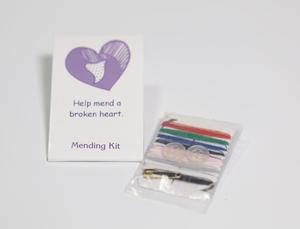