Cheylon Brown worked in the office of the Center for many years before taking on the Directorship in December 2002. Shortly thereafter the office once again took on a new name, Multicultural Center. At this time the Center began to develop plans to improve inter-departmental collaboration and public relations strategies while continuing to serve the ever evolving student population, and working with over 30 student organizations. Brown would also later concurrently hold the Directorship of the Women’s Center.

In her time as Director, Brown continued to support established programming like the Women of Color Conference, which she helped establish under Director Hill. Brown was determined to make these events easily accessible by all students, to help inspire women of all ethnicities, and allow men to see what women face in their life and careers. The Center even opened the keynote speech of the Women of Color Conference to those not attending the conference, in order to involve more students.

Brown also implemented the Each One Teach One series, where film screenings and lectures were held during the lunch hour for students to attend. The films and lectures presented focused on bringing awareness of issues within our society, to share various cultures, and to inspire discussion and a learning experience, that each attendee would carry with them into their life. 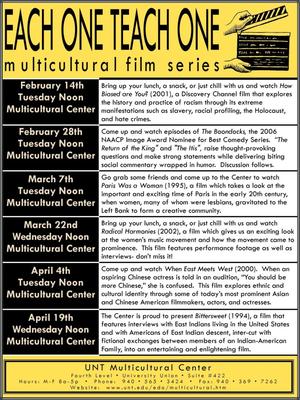 In 2016, Damien Torres became Director of the Multicultural Center. Torres has continued many of the wonderful programs established by Dr. Hill and Brown before him, while continuing to adapt programming to the ever changing needs of UNT students. While still the Assistant Director, Torres worked with D-FW businessmen to form the Few Good Men mentoring program. The goal of this program was to allow young men of color to have connections with successful businessmen of color to provide mentorship and learning opportunities.