After the resignation of Ortiz, the Center for Ethnic Affairs went without a Director for a short time, until NT decided to change the department. Without input from students associated and affected by the Center for Ethnic Affairs, NT administrators dissolved the Center and created the Intercultural Center, which would include international student issues. Minority students were unhappy about already having their minimal funding cut, and being offered to international students, who they thought needed their own services department, as these different groups have distinct needs.

Assistant Dean of Students Harve King became the Director of the Intercultural Center, and remained in the position from 1975-1980. He continued to support many of the same programs that had been established by the Center for Ethnic Affairs, such as Black and Mexican-American Emphasis weeks. He helped these two major events grow as part of the campus culture, even having Rev Dr. Martin Luther King Sr. act as the keynote speaker for Black Emphasis Week in 1976, sponsored by both the Black coalition and Student Activities Union, and in 1977, King crowned the first Miss Black NTSU.

Argie Neil Madison acted as Director of the Intercultural Center from 1980-1985. Madison’s main interest was to emphasize the needs of the students in the programming for the Intercultural Center. She encouraged students to offer input on the type of programming they wanted based on their needs, and to let them voice what issues affected them most. Once she had this student input, she began to form programming around those needs.

One of her first actions as the new Director was to extend Black Emphasis Week to a full month. The first Black Emphasis Month was held in February 1980. Madison’s goal in this extended programming was the bring minorities into the mainstream of campus. She intended for Black Emphasis Month to be a time when black students shared knowledge about their culture and history, as opposed to emphasizing differences between cultures on campus.

In 1981, Madison created the “I Care” program to help black and Hispanic students adjust to college life for the first time. Many of these students were first generation college students, and upon entering higher education, Madison saw that many of them needed guidance on adjusting to being outside of their parent’s homes, navigating academic issues, personal budgeting, self-marketing, and human relations. She meant for this program to encourage students to finish their college education, and have the skills to then carry that success into the workforce.

From 1985-1986, Dr. Greg Sawyer acted as Director of the Intercultural Center, around this time also known as Intercultural Services. Sawyer updated the “I Care” program which was popular among students, to focus more on helping students to nurture the skills they already had to ensure that they graduated. His new program was called STAR (Skill Training and Academic Retention). The focus of STAR was student retention and this new program was open to all students, not just minority students. Sawyer’s focus on student retention also came through in his desire to get students involved, either with Intercultural Services or other student organizations, so that they felt connected to and supported by their campus community.

On the subject of supporting minority students specifically, Sawyer had two major focuses. The first was in bringing minority faculty and students together at a major reception in order to help students connect with role models from their own communities. This was the first major meeting of minority students and faculty on campus. The second focus Sawyer had was a newspaper series for Black Emphasis Month in 1986, Intercultural Services sponsored the “Famous Black Pioneers in History” series in the Campus Chat newspaper. This series again helped minority students identify role models, and also brought forth minority history often not taught in public schools.

Harold Bell acted as Director for the Intercultural Services department from 1986-1995.

An interesting forum that Bell held in 1988 was titled “Black and White Uptight.” This forum was meant to allow a discussion of racism and to address stereotypes of both black and white people. The forum was appreciated for its efforts, but got some negative feedback because of its narrow scope focused on black and white students, while many other races and religions often effected by stereotypes were not represented.

As part of Black Awareness Month in 1989, Intercultural Services hosted a one day conference titled “Gone with the Men: The Vanishing Black Male,” focused on issues specific to black men, such as education and criminal justice among others.

In 1989, the Intercultural Services department hosted the first Celebración Banquet.

Because of the timing for Hispanic Heritage Week being so close to the start of the school year, student organizations struggled to plan a full month of events, but in 1989 Hispanic student organizations banned together with Intercultural Services to create a full month of events celebrating, not only Mexican culture, but Columbian, Puerto Rican, Spanish, Cuban, and other Hispanic cultures represented on NT’s campus. 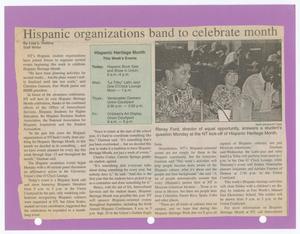