Beginning with his first novel, The Posthumous Papers of the Pickwick Club, Dickens used a “part issue” format, with each part containing thirty-two pages of text with two engraved illustrations bound in green paper. There were twenty monthly parts appearing on the last day of the month, the last part a double issue containing both parts XIX and XX. Each part contained several pages of advertisements. The last part contained a title page, preface, dedication, and table of contents, so the purchaser could take the entire thing to a binder and have it made into a bound volume.

Until Dickens began publishing, the part issue had been used almost exclusively for reprinting popular works, such as encyclopedias and the Bible. Nine of his novels were published in this format, with the unfinished work The Mystery of Edwin Drood projected for twelve parts. His other six novels were published in magazines. After serialization the novels were offered on sale as bound volumes.

Posthumous Papers of the Pickwick Club

In a matter of months, The Pickwick Papers skyrocketed the young Dickens from obscurity to the position of the best-selling novelist of his time. While the first three monthly parts sold only a few hundred copies, his final installments sold approximately 40,000 copies, as everyone seemed to be reading the novel. Published in twenty parts, Pickwick was the publishing sensation of the century. All sorts of association merchandise could be found for sale in shops: plates, mugs, teapots, pitchers, spoons, many with images of the Pickwick characters. 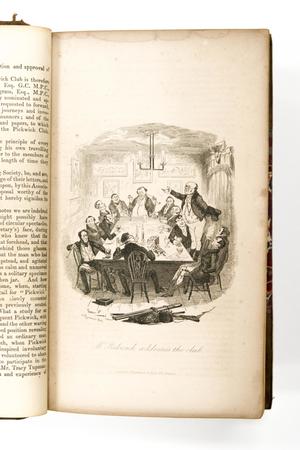 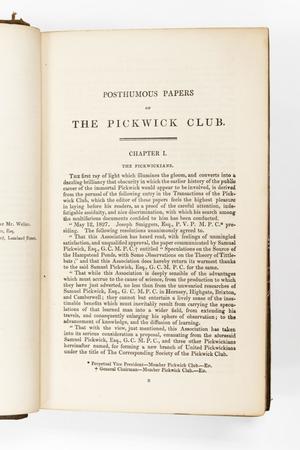 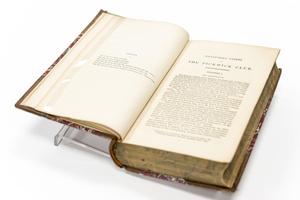 Because of lax enforcement of copyright law, Dickens was the victim of plagiarism from the beginning, with artists selling “extra” sets of illustrations (not authorized by Dickens) to the novel. When the serialization was complete, George Reynolds began a new serial, Pickwick Abroad, purported to be a continuation of Dickens’s novel. 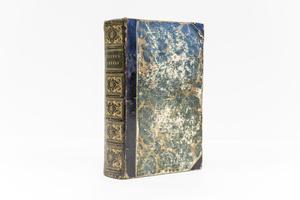 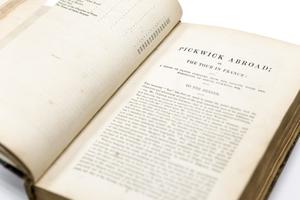 Our Mutual Friend was Dickens’ fourteenth novel, the first part published in May 1864 and the last part in November 1865. The novel is a parable of the corruption brought by money. Characters inhabit a hollow, middle-class existence characterized by greed and pretense.

The novel was illustrated by Marcus Stone. This illustration, sarcastically titled “The Happy Pair,” shows two characters from the novel, Mr. and Mrs. Lammle, walking moodily on the beach. They are walking several steps apart and Mr. Lammle’s face is downcast as he drags his cane behind him. 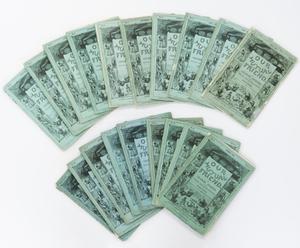 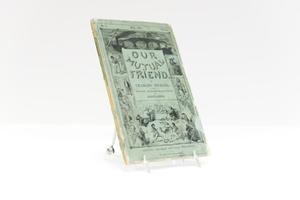 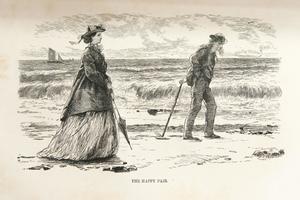 Dickens called David Copperfield “my favorite child,” perhaps because the author was able to fictionalize many of the events of his life: like Dickens, David worked in a factory in London as a child, worked as a law clerk, learned shorthand in order to become a court reporter, and was a successful novelist. Later Dickens revisited his childhood in creating some of the events in the life of Pip in Great Expectations.

This volume of David Copperfield is a first edition; later editions of the same year omit the date. The contents of the book were issued in twenty monthly parts, from May 1849 to November 1850. This copy was bound without wrappers and advertisements in ¾ brown leather and brown moire-marbled paper-covered boards. The spine is divided into seven compartments by single gilt rules. 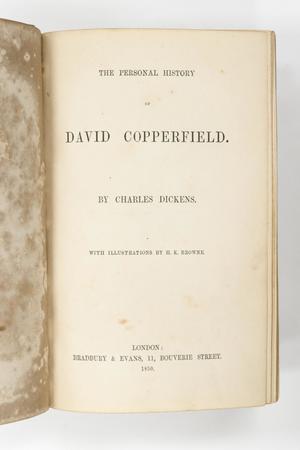 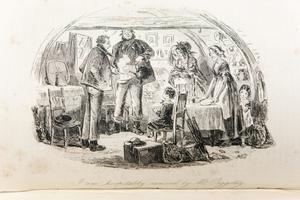 One of Our Conquerors by George Meredith

Meredith, George. One of Our Conquerors. London, 1891. Print.

George Meredith (1828–1909) was a poet and novelist. Since income from the sale of books was irregular, Meredith supplemented it by working as a publisher’s reader for Chapman & Hall, Dickens’s first publisher decades earlier.

One of Our Conquerors is an example of the Victorian “triple decker,” a three-volume format that had been the standard for the publication of respectable novels since the time of Sir Walter Scott in the early 1800s. The typical length of the triple decker was around 900 pages (150,000 to 200,000 words). The price was half a guinea (10s 6d) per volume or a guinea and a half for the entire work—perhaps the equivalent of a week’s wages for a typical working person. Thus, when Dickens began his serialized novels in part issue at 2s per installment, a mode that was immediately widely copied, many more people could afford to buy literary works.

These three volumes are bound in blue cloth over boards with black stamped decorations on the front covers, a blind-stamped publisher’s device on the back covers, and gilt lettering on the spines. 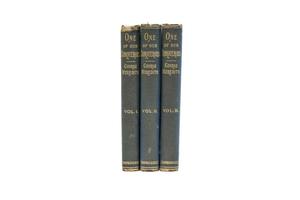 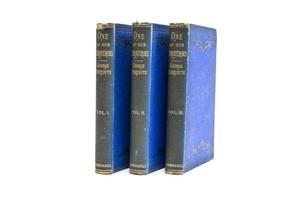 The History of Pendennis by William Makepeace Thackeray

Thackeray, William M. The History of Pendennis: His Fortunes and Misfortunes, His Friends and His Greatest Enemy. London, 1849. Print.

William Makepeace Thackeray (1811-1863) was a friend of Dickens as well as his chief rival for literary fame as a comic novelist. Pendennis (November 1848 – December 1849)was published serially at about the same time as Dickens’s David Copperfield (May 1849 – November 1950). The public was unaware that both were autobiographical novels.

This first edition of Pendennis is complete in two volumes; both are bound in ¾ green leather and marbled paper-covered boards. The spines are divided into six major sections with ornate gilt floral designs and applied dark red/maroon spine labels with gilt titles. Both volumes show evidence of stab holes in pages, suggesting that either the original part issues were rebound by the customer or were sold as the first bound edition produced by the publisher from unsold part issues. 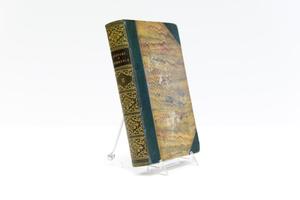 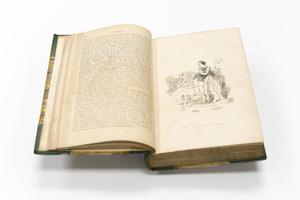