Credentials demonstrate a person’s record of service or accomplishment, as in the case of diplomas or identifications. Likewise, they establish someone’s qualifications or abilities. But in order for them to work appropriately, credentials have to be recognizable for what they certify. For example, academic credentials are ultimately useless unless they can be determined to prove the accomplishments and qualifications of the person who holds them. The intelligibility of credentials–that which makes them valuable–are formalized and authenticated by bureaucratic forms.

This diploma from the North Texas Normal College was bestowed on Nettie Williams in June 1897. It serves as a formal declaration that its bearer is “entitled to whatever consideration scholarship, industry, and moral worth are accustomed to receive.” The diploma highlights the bureaucratic functions of credentials. As proof of an accomplishment, this diploma is intended to open doors to opportunities normally closed to the undereducated or uncertified. As a physical document, it provides material evidence of accomplishment, which can be carried, displayed, and in this case, smelled. Whether or not this diploma opened professional opportunities for Williams is uncertain. What we do know is that soon after her graduation, she married the editor of the local newspaper, the Denton Record-Chronicle.

When Williams earned this diploma in 1897, North Texas Normal College was primarily a school for educating public school teachers—a normal school. But the school also offered “college” courses of study during its first decade in existence. This diploma was awarded to Williams for completion of the “English Course,” which was a three-year course of study focusing primarily on “modern subjects,” including math and science, modern languages, and literature. The English Course was designed as a middle option between the two-year professionally focused teacher training course (the Normal course) and the four-year academic Classical/Scientific courses. The English Course was supposed to prepare students for professional work beyond teaching by exposing them to a more rigorous education than normal school training afforded. It appears from enrollment rosters that Williams passed the teachers course in 1896 before enrolling in the English Course.

Williams’s graduation came at an interesting time in the history of North Texas Normal College. The school was first opened by Joshua C. Chilton in 1891 as a private venture, backed by a group of local businessmen called “the Syndicate.” Chilton resigned in 1893 after breaking down “both financially and physically” (“Letter from J.J. Crumley”). He was replaced by John J. Crumley, who worked with State Senator Emory C. Smith to secure the right for the college to “confer state teaching certificates.” This move marked the school as a “semi-state” school, although it remained financially independent. In subsequent years, the school changed hands again due to financial challenges. Menter B. Terrill, the school’s third president, signed Nettie Williams’ diploma not long after taking control of the institution in 1894.

Two years after Williams graduated from NTNC, the State of Texas declared North Texas Normal College a state institution, but the school remained in private control for two additional years because the Legislature did not initially provide any funding. In 1901, the state officially took control of the normal school and renamed it North Texas State Normal School. There is some suggestion that the college courses at North Texas Normal College were “not in all cases faithfully issued” (“Letter from Arthur Lefevre”). When Williams earned her diploma for completing the “English Course” in 1897, North Texas Normal College was still a private institution, but when the state of Texas took over control of NTNC, the college courses were discontinued and only teacher training credentials were offered. At the same time, the Texas Legislature established the Girls Industrial College (now Texas Woman’s University), located just a few miles away. North Texas State Normal School would not begin offering college level courses again until the 1910s. 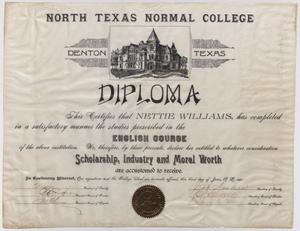 Application Forms. Texas Society of the Sons of the American Revolution

The Texas Society of the Sons of the American Revolution is a chapter of the National Society of the Sons of the American Revolution, a fraternal and civic organization first founded in 1889 in connection with centennial commemorations of George Washington’s inauguration as America’s first president. According to the Texas Society’s constitution, the main goals of the organization are to advance the historical, educative, and nationalistic values of America’s Revolutionary War patriots (Marrs). These goals are accomplished through an expansive network of educational programs, philanthropic donations, commemorative service, scholarship programs, and more. According to the National Society’s website, the organization’s membership has included sixteen U.S. Presidents, among other notable figures including Supreme Court Justices, decorated military officers, and business professionals (“Our Membership”). The Sons of the American Revolution received Federal sanctioned as a Patriotic Society in 1906.

In order to be admitted as a member to the Sons of the American Revolution (SAR), applicants are required to establish their direct lineage to someone who fought in the Revolutionary War, signed the Declaration of Independence, or otherwise contributed to the cause of the American Revolution. This book compiles 115 completed application forms for the Texas Society of the National Society Sons of the American Revolution, dated between March 1951 and April 1953. The applications collected here were issued by the National Board of Trustees for applicants to the Texas chapter of SAR, which was founded in 1896. Applicants provided genealogical details about their ancestors, including their birth and death dates and their documented service to the “establishment of American Independence during the War of the Revolution” (Membership). Applications were then notarized and embossed before being submitted to the National Society for verification and approval. Interleaved throughout the book are requests for additional documentation, along with corroborating materials submitted by applicants.

In addition to documenting and organizing the applicants’ claims to membership in the Sons of the American Revolution, these applications also demonstrate a key aspect of bureaucratic credentialing inasmuch as they represent applicants’ attempts to have the ancestral connections to the American Revolution officially certified. Moreover, the forms themselves evince several layers of bureaucratic procedure, including the distribution of a common form to various state chapters, the requirement of notarization, and the collection of verifying materials, all of which are processed and adjudicated at many levels of the credentialing organization. 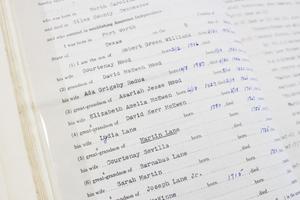 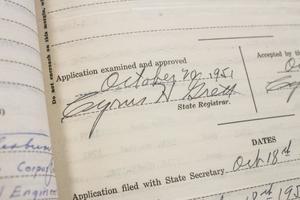 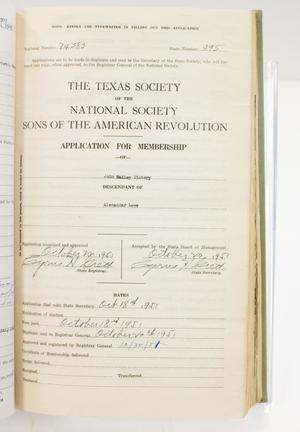 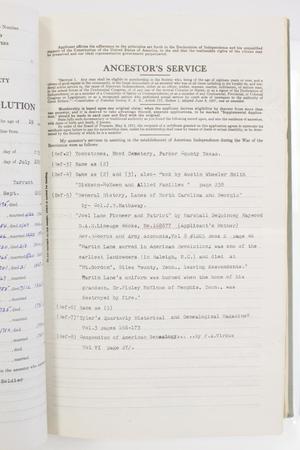 The four bulletins bound within this volume were issued by the North Texas State Normal School between December 1903 and July 1904. The bulletins detailed institutional policies, including information about costs, admissions requirements, curricula, the normal school’s mission and history, summer school, entrance examinations, and personnel. Although primarily intended to catalogue the school’s policies, the bulletins served a number of complicated functions, perhaps the most important of which was to serve as marketing materials. Bulletins were distributed to schools, businesses, and government agencies throughout the state and surrounding areas to demonstrate the strengths of the school, including “moral and religious influences,” the extent of library and laboratory equipment, the credentials of faculty and administrators, the credentials of faculty and administrators, and educational philosophy. This information, it was hoped, would impress people who would then encourage potential students to attend.

In addition, this series of bulletins provides some interesting glimpses into the ongoing efforts to establish the institution’s credentials as a high quality teacher-training institution. According to the opening historical sketch in the December 1903 bulletin, North Texas State Normal was created in 1899 by legislative enactment. This statement is both true and false. In fact, a private normal college had been founded on the same site in 1891. Over the course of approximately a decade, the school struggled to recruit students, and it changed hands a number of times. In 1893, a state senator introduced legislation to allow the normal college to offer state-sanctioned teaching certificates, thus making the school a semi-state school. By 1899, recruitment continued to lag, and state and local officials lobbied to convince the Texas Legislature to make North Texas Normal College an official state normal school–hence the 1899 birthdate for the school (Gammel 1902). However, while the vote was passed, no funds were allocated, so the school remained in private control until 1901 when the state of Texas took full control of the school’s administration, making 1901 the actual origins of the state-administered institution. By marking 1899 as the date of North Texas Normal’s official creation, the 1903-1904 bulletins officially separated the current institution from its private predecessor, despite the fact that the university occupied the same physical structure. The goal, of course, was to emphasize the school’s state credentials and downplay its historical (and disreputable) existence as a private normal college.

These bulletins also situated the normal school within a long institutional tradition. While under private control, the institution had been labeled a “normal college,” and it offered two different curriculums. One was “collegiate,” which meant that students took a classical college course based on Latin and Greek. The other curriculum was “normal,” which meant that it focused strictly on teacher training. A normal school education led to what was essentially a professional degree, as opposed to an academic degree. When the state took control of the school in 1901, however, the college curriculum was disbanded and the school became exclusively a normal school. In the December 1903 bulletin, the mission statement asserts, “The Normal is neither a college nor a university” (3). The next issue, dated February 1904, provides an extended history of normal school traditions dating back to the sixteenth century Europe is provided (3-4). This history serves again to distance North Texas State Normal from its first decade in existence while at the same time establishing it as part of a centuries-long tradition of educative excellence. 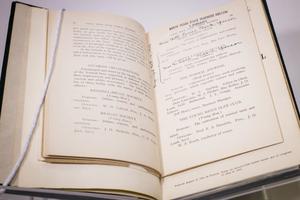 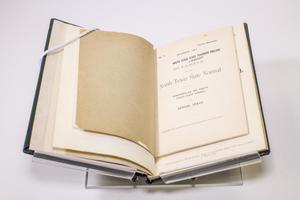 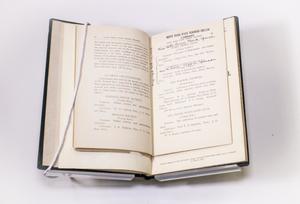 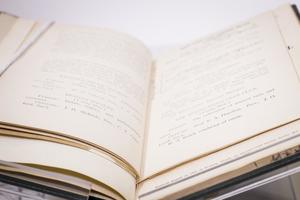 This volume contains official bulletins for the North Texas State Teachers College, including the 1927 summer quarter bulletin and the 1927-1928 general catalog. This volume gives a glimpse into the state of the institution during the mid-1920’s. As with the other bulletins in the collection, this volume includes sections on general information, expenses and fees, and certificates and degrees offered. It also outlines the prerequisites needed for particular classes or degree plans and requirements for graduation. Finally, the bulletin lists registered students and summarizes degrees granted, dating back to 1918. Just as important, the bulletins give a rich history of life on campus, by including pictures and detailed descriptions of various extra-curricular activities offered by the college.

These bulletins were published just after North Texas State Normal School had transformed into North Texas State Teachers College. This change represented a significant institutional change inasmuch as it required an expansion of degree offerings and curricula, which would align it with other colleges in the state of Texas. The change from normal school to teachers college also required a more substantial bureaucratic organization, with more administrators, more divisions, and an increasingly hierarchical power structure. North Texas State Normal became a teachers college as part of a major national shift in which normal schools were nearly all transformed from normal schools into teachers college, along with expanded curricular and administrative requirements.

The Southern Association credentials allowed North Texas State Teachers College to offer a wider range of courses and to recruit more students by offering different curricula than other teacher training institutions. Additionally, it ensured that NTSTC graduates could teach in any Southern Association accredited elementary or high school, which made it easier for NTSTC graduates to relocate across state lines. The credentials advertised on the front of the June 1927 catalog, then, represent a series of intense institutional battles that reverberated throughout the state of Texas, the southern region of the United States, and in fact throughout the country, as more and more teachers colleges began to seek regional accreditation.

Find the Bulletins of the North Texas State Teachers College in the UNT Libraries Catalog. 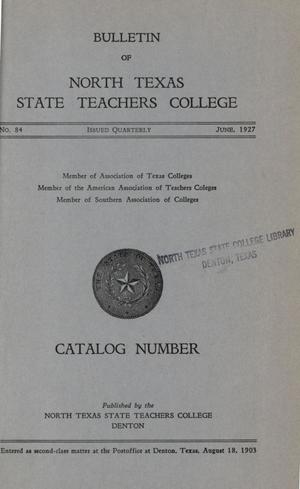