Bureaucracy is often an implicit promise in the sense that standardized procedures guarantee a certain outcome. But in some cases, bureaucracy offers a more explicit form of promise, such as when a loan document indicates a promise that the borrower will repay the loan or when an admission ticket promises that the bearer will be granted entry. Bureaucratic forms enact a promise that future outcomes can be guaranteed. Bureaucratic promising, therefore, is intended to reduce uncertainty about future events, actions, and results.

The Texas Normal College and Training Institute was established in 1890 by Joshua C. Chilton, a normal school president and teacher from Orleans, Indiana. In order to secure the school in Denton, a group of local businessmen donated ten acres of land to the city of Denton for a center to train teachers. During the first year, 185 students of varying ages attended the school. Many of the students were working full time (often as teachers) and needed additional education to advance professionally. The courses at Texas Normal College were arranged so students could enroll any time, could take courses when they were available, and could opt to take only the courses that they believed would be professionally advantageous. The tickets shown here provided proof that a student had paid for his or her courses and were entitled to enroll. In order to allow students to take full advantage of the flexibility in enrollment, registration was handled by issuing tickets that students could exchange whenever they enrolled in a course. Tickets came in books of five, and they could be exchanged for a combination of classes, lectures, or drills. The tickets initiated a system used to allow students into classes with proof of payment. On the back of the tickets are blank spaces provided for “Amount Paid” and even a space for a signature. This is a binding agreement between school and student that guaranteed students that they would be allowed to enroll in classes once proper payment had been made.

Texas Normal College and Training Institute was one of hundreds of teacher training programs of various size and quality established around the country following the Civil War. Many of the teacher institutes were temporary schools that enrolled working teachers for 2-6 week sessions during summer breaks. In contrast, Texas Normal College and Training Institute had a physical campus and ran year round. As such, it needed to attract and provide for a consistent student body.

In order to recruit students and the funds they brought with them, Texas Normal College and Training Institute’s curriculum was broad—there were six collegiate courses, a teacher training course, and secondary level courses. Although the courses of study were designed to be comprehensive, students were allowed to take as many or as few courses as they wanted. Additionally, students could take preparatory courses—equivalent to what was offered in local public schools—that would prepare them for post-secondary work. Promotional materials also indicated that students would be credited for work they completed at other schools. Moreover, according to the 1890-1891 “Course of Study,” “Our classes are arranged as to enable students to commence at any time, and no student will be turned away who, for valid reasons, could not enter at opening of term” (17). Despite these various attempts to attract students, including non-traditional students, Texas Normal College and Training Institute was financially unstable and faced bankruptcy for almost a decade after it opened.

This certificate suggests two different bureaucratic functions. One, the original function of the diploma, is a credential to be bestowed upon a student who completed his or her course of study at Texas Normal College. But the second bureaucratic function is a form of promising inasmuch as the scholarship coupons represented a promise that a student or students could attend the school and take courses by virtue of possessing one of the coupons. The fact that the diploma was repurposed calls our attention to the ways in which bureaucratic forms are often used to do things that they were never intended for. 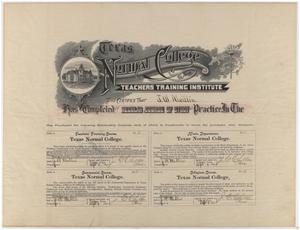 The Texian Loan Certificate documented a loan to the newly formed Republic of Texas in 1836. This certificate was issued on January 11, 1836 to Robert Triplett and indicates that Triplett paid the first $32 installment of a $320 loan to the government of Texas. In anticipation of the Republic of Texas’s Declaration of Independence from Mexico in March of 1936, Texas representatives sought private loans to establish and maintain the independent government. Texas representatives primarily sought investors in the United States and offered either a high interest rate (8%) or cheap land in Texas ($.50 per acre) in order to attract investments. A number of people did invest, but Triplett was possibly the largest contributor. Triplett was a settler and investor in Texas while the area was governed by Mexico. After Mexico gained independence from Spain in 1821, the new Mexican government needed to attract settlers and investors, which were known as empresarios. Triplett was among an early group of empresarios who sought to establish colonies in Texas. Other empresarios included Stephen F. Austin and Sam Houston. When Texans started agitating for independence from Mexico in the 1830s, Triplett loaned the Texas government over $100,000, which is roughly the equivalent of $2.5 million in 2014, to form and maintain the government. The Texian Loan represented an official guarantee that the loan would be compensated per the agreed upon terms. It was signed by Texas’s official commissioners, including the “Father of Texas” and first Secretary of State, Stephen F. Austin.

The Texian loan certificate is particularly interesting as a form of bureaucratic promising. When the loan certificate was issued in January of 1836, Texas was still officially a territory of Mexico. Texas’s American settlers, called Texians, had been fighting Mexico for independence since 1834 as a result of disagreements between settlers and Mexico’s leaders about slavery. The Texians had seen significant military success, but the territory was nevertheless still part of Mexico when Austin and others began courting investors. The loan certificate, which was issued and signed in New Orleans, acted as a bureaucratic promise in at least three ways: first, it was a promise that Triplett would lend Texas a certain amount of money, of which this was the first installment; second, it represented a promise that Texas would have a government capable of repaying the loan; and third, it represented a promise to faithfully execute the specific terms of the loan. We might conjecture, as well, that it was issued and signed in U.S. territory, instead of Mexican territory, as a promise that the terms of the contract were not voided in the event that Texas ceased to be a part of Mexico, which happened two months later. Whether or not the place of issuance was an integral part to the loan’s trustworthiness, it is clear that the other three parts of the promise were fulfilled. The triangle cutout in the middle of the document is a cancel mark indicating that the loan was paid in full. 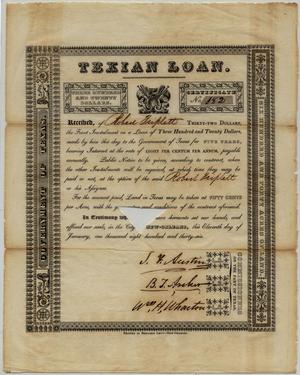 Message from the President of the United States

This pamphlet collects letters, documents, and reports relating to the establishment of the Republic of Texas as an independent territory following the military conflict between Texas settlers and the government of Mexico in 1835-1836. These documents include Texas’s Declaration of Independence from Mexico and the Constitution of the Republic of Texas, both of which were issued in March of 1836. Delegates in Washington adopted the Declaration of Independence on March 2, 1836. At this time, the siege of the Alamo was nearing its conclusion in what is now San Antonio. The Constitution was adopted approximately two weeks later, on March 17. Additional materials collected in the pamphlet include correspondence between the seventh President of the United States, Andrew Jackson, various other members of the U.S. government, and the leaders of the newly established Republic of Texas.

These letters illuminate an important time for the United States and Mexico, but more specifically for Texas. In the 1820s, American settlers negotiated with the Mexican government to establish a colony in Texas. In the early 1830s, however, Mexican authorities attempted to revoke the settlers’ agreement because of disputes over slavery in the territory. These disputes ultimately evolved into military conflict in 1834. The following year, after a series of military successes, the Texian settlers declared their independence from Mexico and established the Republic of Texas, an independent territory. The documents collected here represent a brief period of approximately three months, from March to June 1836. During this time, the Republic of Texas sent several emissaries to the United States to gain official recognition for the new republic’s independence from Mexico. Official recognition had serious implications for trade agreements and diplomatic relations. But more importantly, as is clear in these documents, Texian representatives wanted to receive assurance that the U.S. would not side with Mexico to bring the Texas territory back under Mexican control. In one letter to Secretary of State John Forsyth, for instance, two representatives of Texas indicated their certainty that “the Government of the United States … will adopt such course of action in relation to the matter [of independence] as it may deem due to the Republic of Texas, and accordant with those principles both of strict neutrality and impartial justice which have ever characterized its intercourse with foreign nations.” Of course, the United States did not intercede on Mexico’s behalf, and the U.S. granted the Republic of Texas official recognition as an independent republic in 1837. Texas remained an independent republic until it was annexed by the United States in 1848 following the Mexican-American War.

Find Message from the President of the United States: In Compliance with a Resolution of the Senate, Relating to the Condition of Texas in the UNT Libraries Catalog. 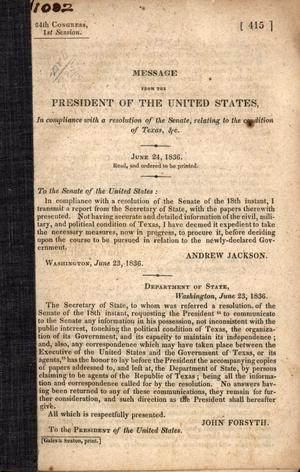 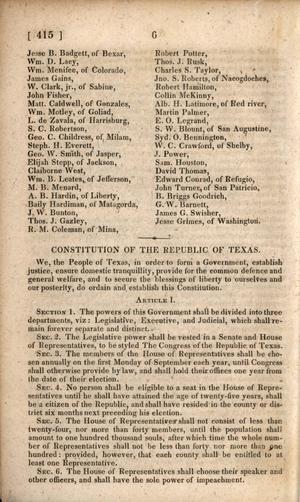 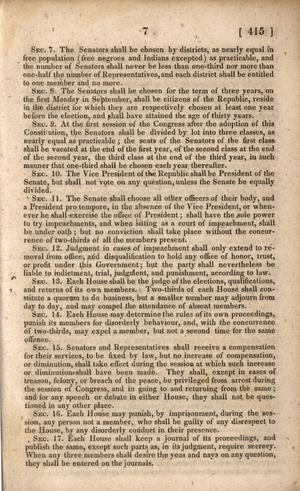