The Cat's Out of the Bag: Walter Crane’s Faerie Queene

Held as one of the most beautiful works of the late 19th century arts and crafts movement, Walter Crane’s lavishly illustrated edition of Edmund Spenser’s masterpiece Faerie Queene was printed in a limited run of 1,000 copies. It is one of the most highly praised and sought-after legends in fine printing history. London publisher George Allen printed this six volume set in 1897. The copy acquired by UNT is bound in rich maroon morocco leather.

Walter Crane, like his associate in the Arts and Crafts movement, William Morris, was influenced by the Socialist political movement. Both men were involved in organizations which celebrated craftsmanship, design and sought to bring art into the everyday lives of working people. Crane believed that war was often motivated by capitalistic concerns, and that art could not flourish in a world where wealth was unfairly distributed. Crane shared with Spencer a dedication to justice, honor and chivalry, shown through his elaborate and beautiful illustrations.

Written during a time of intense religious and political controversy, The Faerie Queene is an incomplete epic poem and a masterpiece of fantastical allegory written by English poet Edmund Spenser in the late 16th century. The Faerie Queene was originally intended to include twelve books in heroical verse style, however only six volumes were published before Spenser’s death in 1599. Despite this, The Faerie Queene persists as one of the longest poems in the English language, and is regarded as a singularly important poetic work from the Elizabethan period.

Due to the continued influence and popularity of his seminal work, Spenser is regarded as one of English language’s greatest poets, and is often recognized as a key figure in the development of Modern English verse. 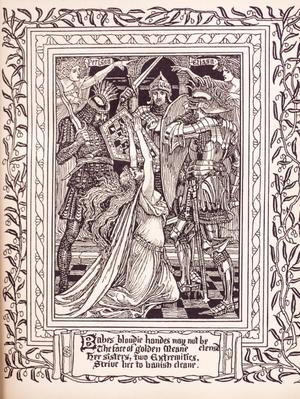 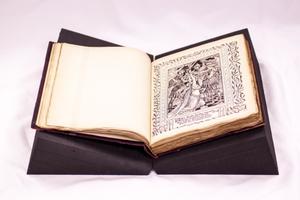 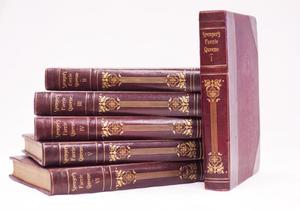