The Cat's Out of the Bag: The Pennsylvania Gazette

Printed and published by Benjamin Franklin in 1749, this issue of the Pennsylvania Gazette offers a glimpse into the cultural, economic, and political lives of colonial Americans.

The Universal Instructor in All Arts and Sciences: and Pennsylvania Gazette began printing in Philadelphia in 1728 under the ownership of Samuel Keimer. One year later, a printer named Benjamin Franklin bought the paper and shortened its name to the Pennsylvania Gazette. The paper soon became the most prominent source of news and commentary of the time period, publishing news articles, editorials, advertisements, and letters throughout the colonial era.

During its run, the Pennsylvania Gazette featured many of Franklin’s own writings as well as the full length texts of such important writings as the Declaration of Independence , the Constitution, and Thomas Payne’s Common Sense. The first political cartoon to appear in America-entitled “Join, or Die” and created by Franklin himself-was also published in the paper.

A man of many talents, Benjamin Franklin’s exploits as a Founding Father and inventor are well-known. However, he considered himself first and foremost a printer. As printer and publisher of the Pennsylvania Gazette, Franklin has been credited as establishing a firm foundation for a free and open American press. Contrary to prevailing notions of the time, he strongly believed in printing all sides of a story, including those deemed unpopular. 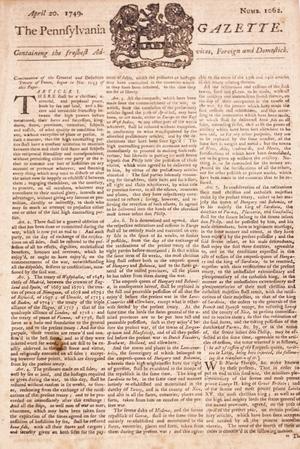