The Cat's Out of the Bag: Moncrif's Les Chats

The 1727 edition of Les Chats by François Augustine de Paradis de Moncrif (1687-1770) was acquired by the UNT Libraries Special Collections thanks to the generous support of Friends of the Library. This is the first printing of the first edition of what may in fact be the first book devoted exclusively to cats. Beautifully illustrated with nine full page engraved plates by Anne-Claude-Philippe de Tubieres (1692-1765) after whimsical drawings by Charles-Antoine Coypel (1694-1752), this frivolous book was first published in Paris by Gabriel François Quillau. It is a treasure for students and scholars of 18th century French literature and French culture.

Playing on the idea of the fluid man-cat boundaries, Moncrif created a light-hearted satire on the foibles and pretenses of his contemporaries. Indeed, in 18th century France, the cat veritably embodied the ethos of salons and court culture: winsome and graceful, languid and seductive, possessed of soft paws that hid its sharp claws, astute and proud, snobbish and artful, playful and pleasure loving, the mysterious creature perfectly mirrored the qualities of its owners.

Les Chats is composed of two parts: the first, written in the form of letters to an aristocratic lady, is a mock treatise in defense of the cat, a graceful parody of punctilious scholarship. The second part, in verse, contains artfully crafted correspondence between a seductive female cat and her male counterpart; included is also a play with all feline dramatis personae: a tragedy of unrequited love, intrigue, death and revenge. Complementing the work are a few additional cat poems, two of which were not authored by Moncrif: a mournful epitaph of a cat by Joachim du Bellay, and a witty fable by the Chevalier de S. Gilles.

Quite possibly, there is an element of self-conscious irony in Les Chats. Details of the author’s biography reveal that he was a quintessential man of his time. Born in France in 1687 to middle-class Scottish immigrants, Moncrif developed an affinity for poetry, dance and music, showing at the same time a penchant for pleasurable life and amorous conquests. A kind and generous man, he was known for his exquisite sense of decorum, a deep understanding of the human soul, and an uncanny ability to please. Moncrif wrote occasional poetry, plays, and ballets. Throughout his life he also got increasingly involved in theater as an actor and producer. Thanks to the support of his patrons and benefactors, the writer became a member of the Académie Française and was appointed to various public posts. He was even granted the position of Reader Ordinary to Marie Leczinska, Queen Consort of Louis XV. In his 1738 Essai sur les nécessités et les moyens de plaisir, Moncrif illuminated his philosophy of life based on natural history and morality. 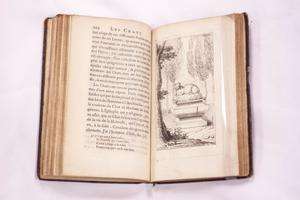 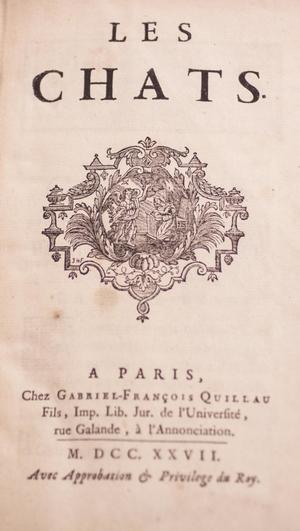 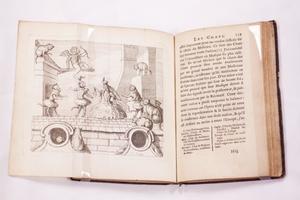