In 1951 the Board of Regents approved doctoral requirements. Harold Hitt became the first person to graduate with a doctorate, receiving a Ph.D. in Administrative Services. In 1951 McConnell stepped down from the presidency and J. C. Matthews became the eighth president. During this time the campus began to take on the appearance that today’s UNT students recognize. The Administration Building, Fouts Field, West Hall, the Health Center, and the Physics-Math Building were just a few of the structures built during this decade.

In the late 1950s North Texas was host to two bright literary talents. Prolific author Larry McMurtry and pioneering journalist Grover Lewis graduated from North Texas State College with Bachelors degrees in English in 1958. The two men were friends and collaborators at North Texas, although they grew apart later in life.

Of all the changes that the university experienced in the past 75 years, none have been as significant as desegregation. A. Tennyson Miller, a black educator from Port Arthur, entered graduate school in 1954. In June 1955, Joe L. Atkins of Dallas applied for admission as an undergraduate student. He was refused entrance and brought a suit in the United States District Court, Fifth Circuit. During the time the suit was pending Mr. Atkins began his studies at another institution. Mrs. I. E. L. Sephas of Fort Worth became the first African American undergraduate when she enrolled in February 1956. By summer more than fifty African Americans were enrolled.

This issue of Campus Chat barely mentions her arrival on campus, with a below the fold headline stating “First Negro Undergraduate Enrolls,” however the mild headline belies the turmoil on campus at the time. It is known from later interviews that President J.C. Matthews dispatched crews to campus in the early morning hours to erase racial epithets which had been chalked on sidewalks and to extinguish a burning cross on the lawn of the Administrative Building.

Abner Haynes and Leon King became the first African-American students to play on the football team in the fall of 1956. Playing on one of the first integrated teams in Texas, Haynes and King faced racism on and off the field. Coach Fred McCain had to ensure in advance that the team had places to eat and sleep while they were on the road, and resorted to bologna sandwiches on at least one occasion. Rival teams also took issue playing an integrated team. After winning a game against Navarro Junior College in 1956 the team was chased onto their bus by an angry mob. 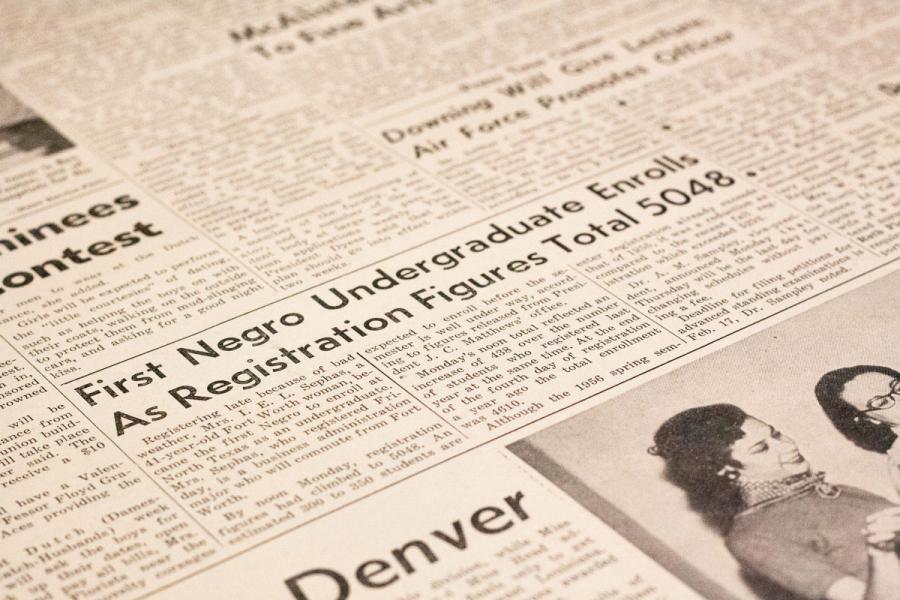 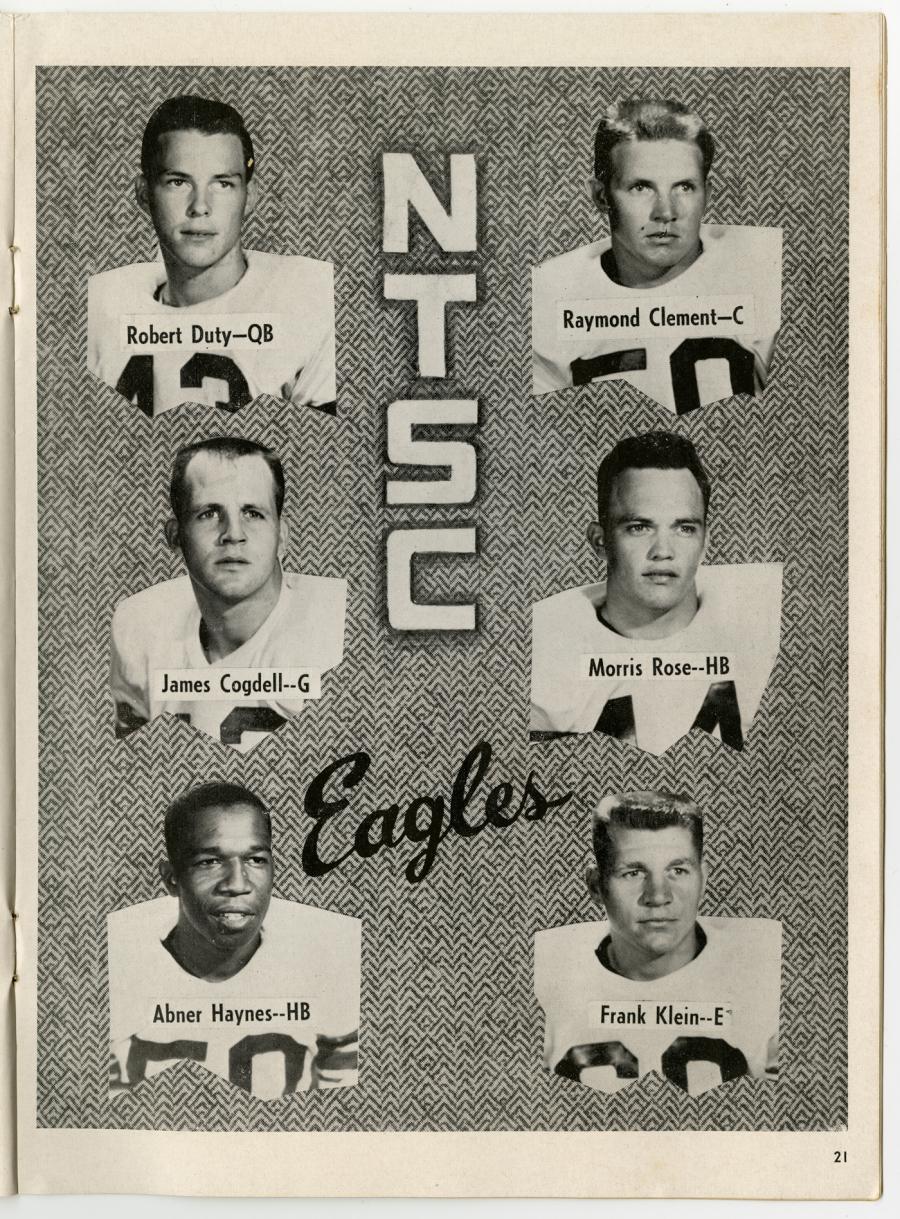 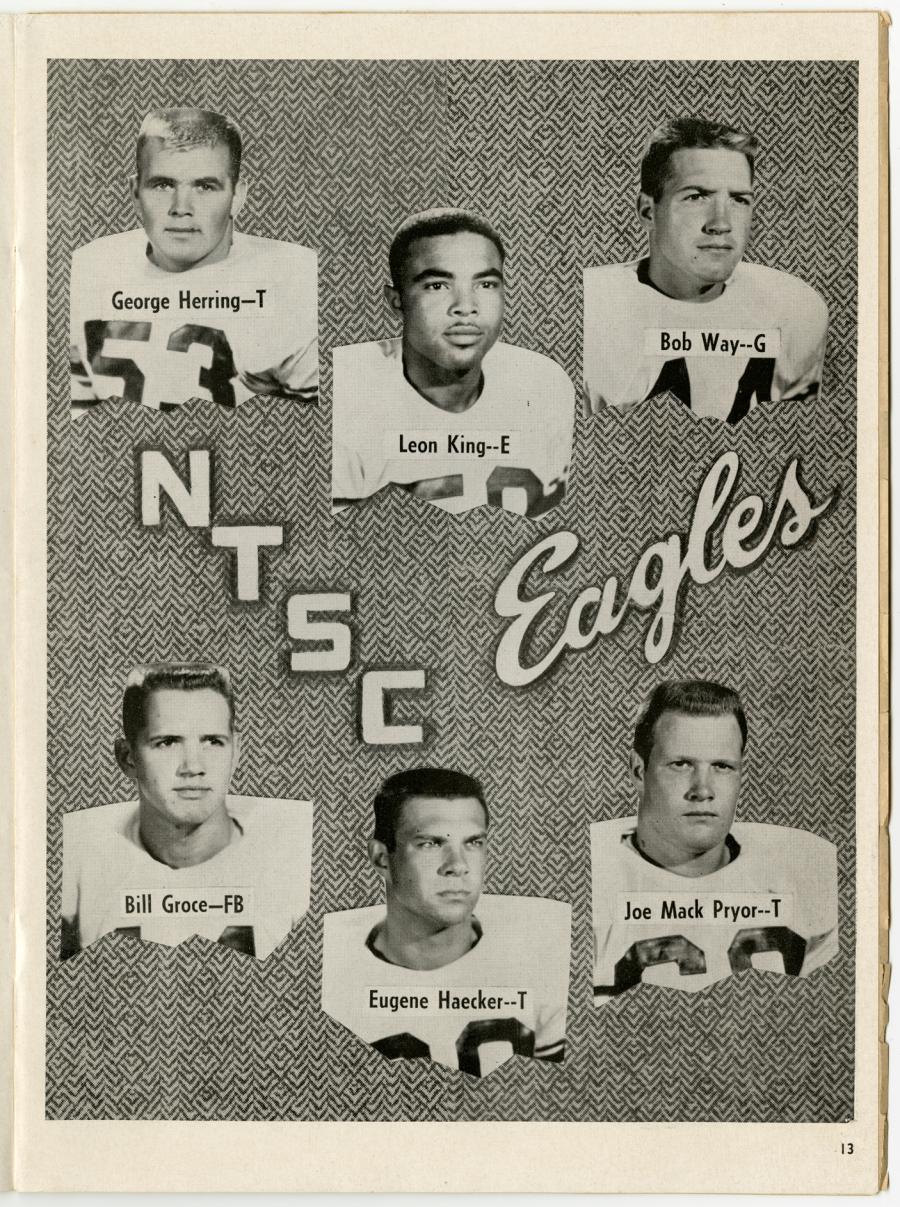 Larry McMurtry and the Coexistence Review

Pulitzer Prize winner Larry McMurtry graduated from North Texas in 1958 with a degree in English. During his time as a student he worked to perfect his writing skills. He made contributions, in fiction and non-fiction, to the school’s literary magazine, the Avesta. This piece of fiction, “The Best Day Since,” was published in the Fall 1956 Avesta. Mr. McMurtry was named a Distinguished Alumnus in 1986.

Larry McMurtry published in an alternative literary magazine known as the Coexistence Review. One entry was to become a part of his first novel, Horseman, Pass By. McMurtry worked on this magazine with Grover Lewis and John Lewis. 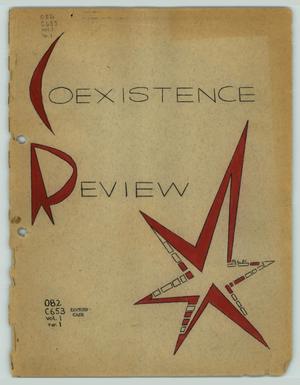 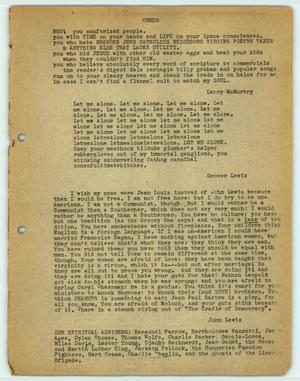 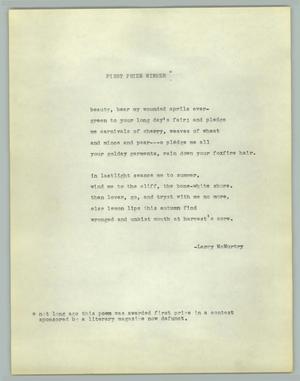 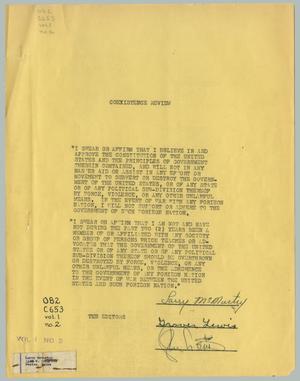 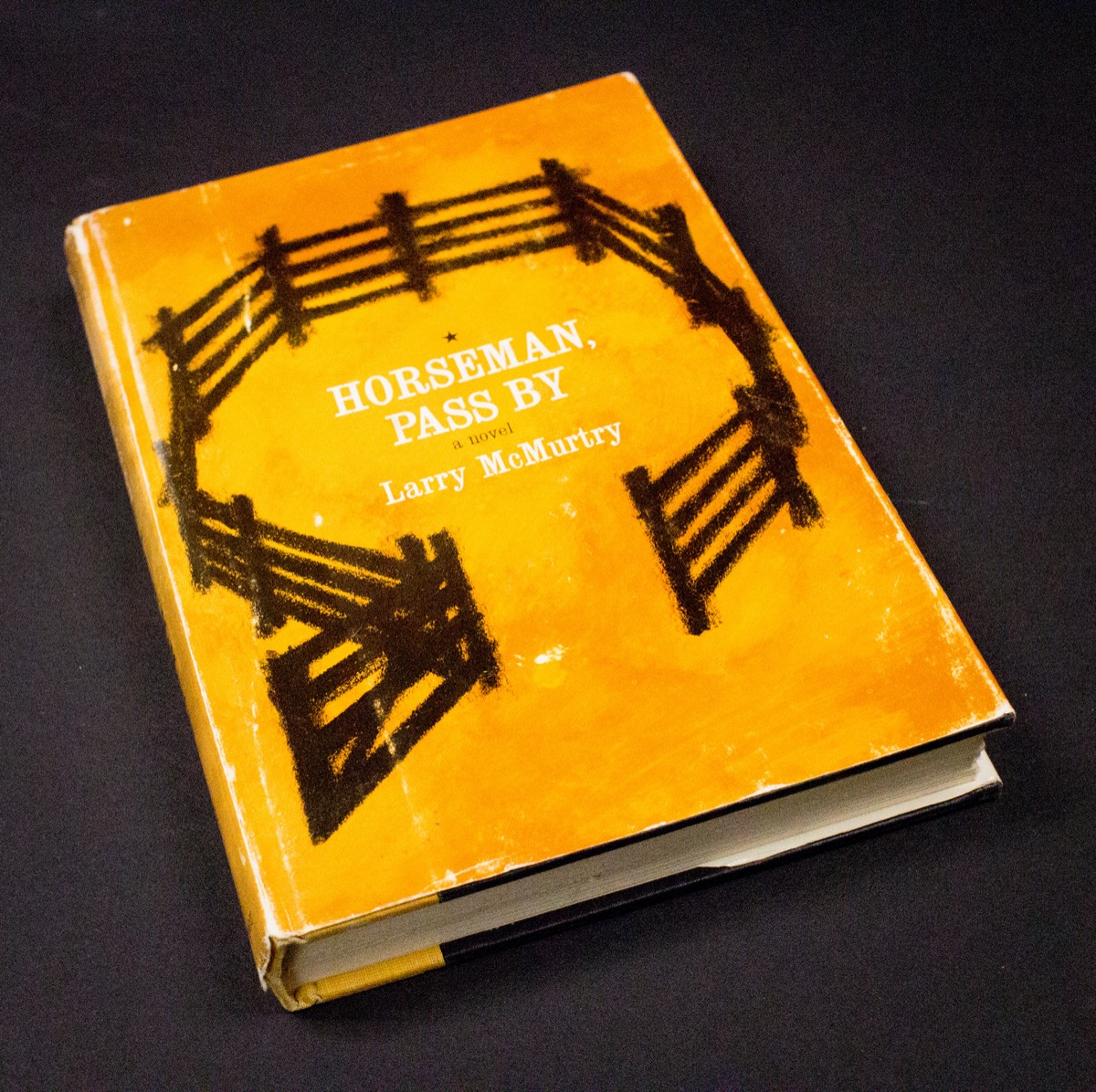 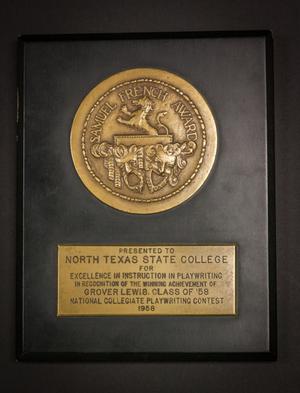 Bill Moyers and the Tip-Off 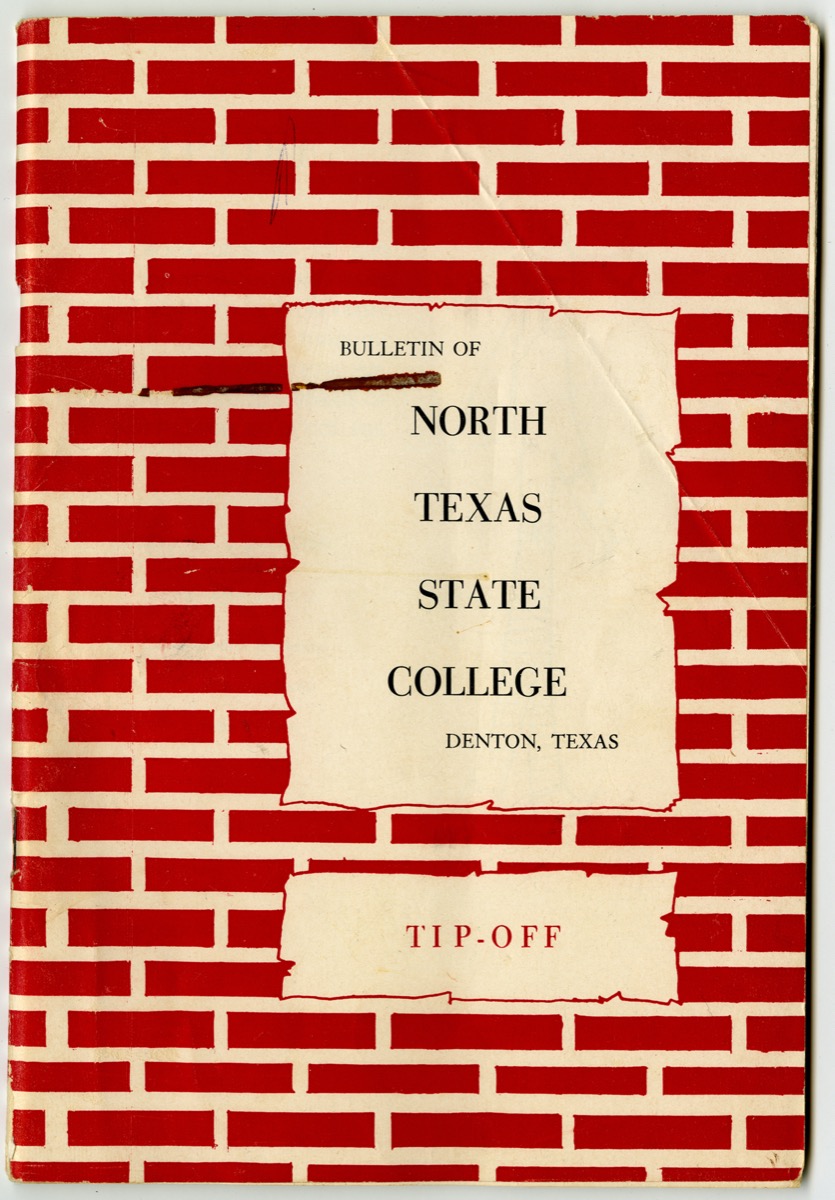 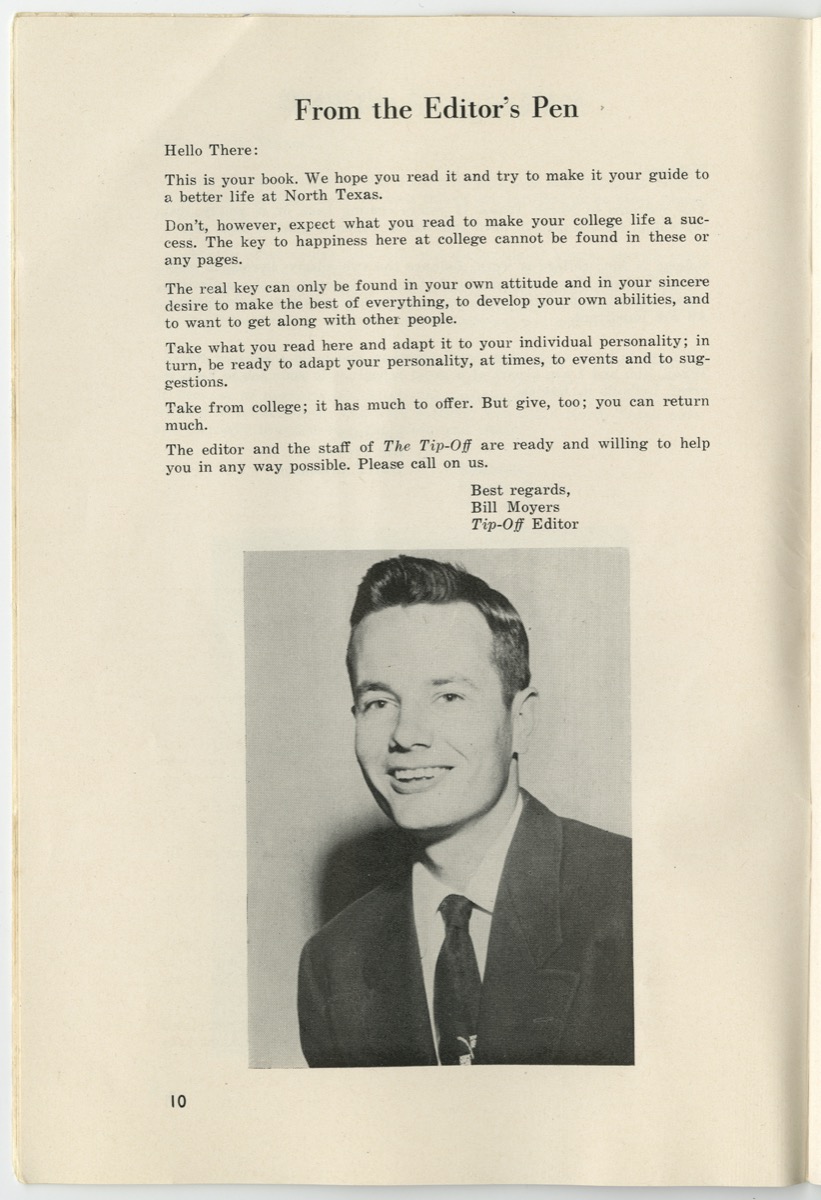 The Brunsviga mechanical calculator was originally developed in 1891 and was manufactured until the 1970s when they were replaced by electronic calculators. This example was used by students and faculty in the NTSU Mathematics Department. 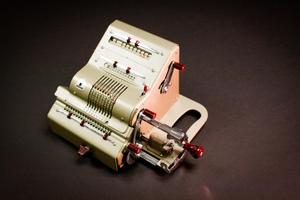 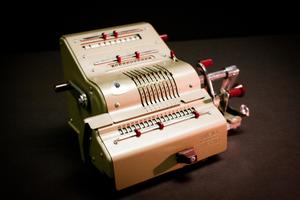 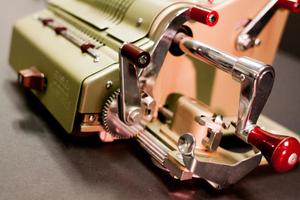 Two general admission tickets for a football game at Fouts Field are pictured. 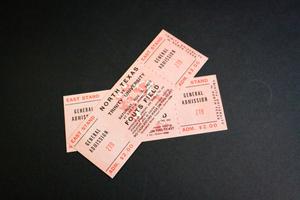