The 1940s were a time of upheaval and change for the students attending UNT. World War II meant that most of the men on campus, the students as well as their professors, were subject to the draft. Soldiers were also on campus for training. By the end of the war, North Texas had hosted six Naval reserve programs, two Army reserve programs, a Marine corps officers cadet class, a Coast Guard reserve cadets class, an Army Air corps pre-flight training, and various Army special training programs.

After the war soldiers returned to school on the G.I. Bill. The increased enrollment spurred the growth of campus and the building of a long sought after Union Building. Other structures that went up during this time were the Journalism Building, and Bruce Hall. The school also changed. A broader curriculum was offered as North Texas moved away from a teacher education base to majors that allowed students to pursue careers in science, industry, and the arts. The first jazz studies program in the nation was introduced by Gene Hall.

The final change in this decade was a new name, the fifth in the school’s history. North Texas State College became the new moniker in 1949.

The Men and Women in World War II from Denton County

This Book, The Men and Women in World War II from Denton County, contains photographs and biographical information on the men and women who served in the armed forces in World War II. The book was published in 1945. 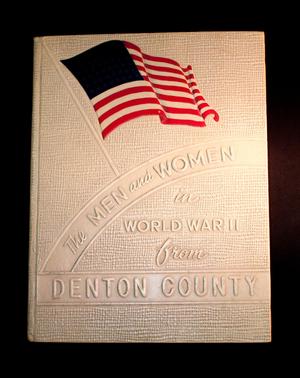 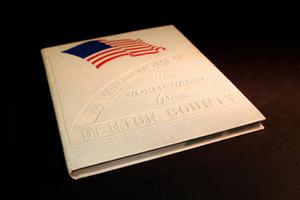 A Freshman Beanie was often the first thing a student purchased on campus. This beanie has “48” embroidered on the front, representing the student’s expected graduation year. The beanies were worn at the beginning of the fall semester and to the first football game. 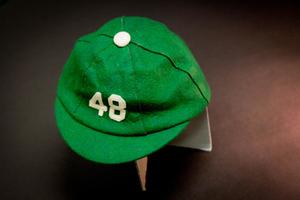 In April, 1942 the Women’s Defense Corps was formed at UNT. The primary purpose of the organization was to train college women to organize their hometown defense and to instruct their fellow citizens in home defense. Training in the first aid, firefighting, the use of gas masks, and ambulance driving was included in this program. 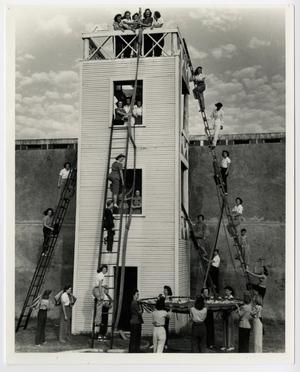 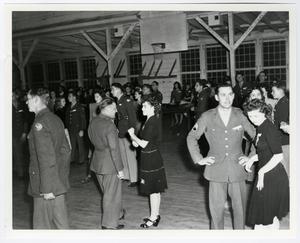 The Civilian Pilot Training Program was instituted at North Texas in October 1940. Flight training, which was provided by Floyd Flying Service, included instruction in air regulations, aerial navigation, and meteorology. About three hundred students received training in the program before its replacement in 1942 by the civil aeronautics administration program. Pictured are Charles Sanford and Howard Jackson in the plane, and Newell Langford spinning the propeller. 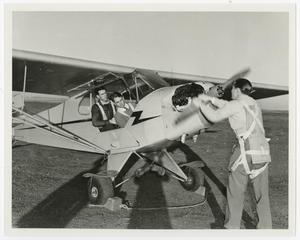 One of several military units training at North Texas parades down Denton’s Theater Row in 1942. From September 1942 to December 1943, training detachments of the Army Air Forces were housed in Chilton Hall. 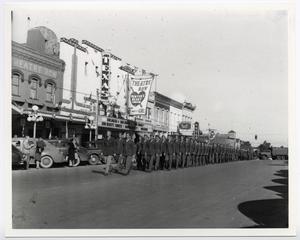 “War Jobs for Women” helped direct students and community women to take up work to help the war effort. “A Presentation of Facilities of the North Texas State Teachers College Available for Use by the Federal Government in the War Emergency” was published to provide information on organizing the campus to provided training and housing to the armed services. 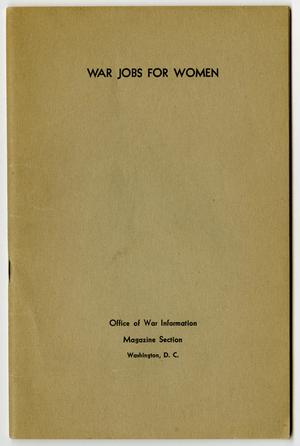 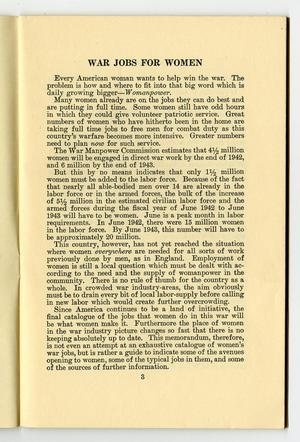