The Lost Generation: World War I Poetry: Images of War

World War I was heavily documented in both text and image. While the convention was to publish poems without illustrations, some collections of poetry included visual representations of war in the form of drawings, engravings, soldier’s portraits, photographs, and decorated publishers’ bindings. Illustration styles range from sketches printed alongside the poems in popular works such as The Making of Micky McGhee (1916) to coarse scribbled drawings in Rookie Rhymes (1917) or Taps (1932). While these works tend toward ribald comedy, more serious collections featured photographs of people, buildings and landscapes. Photography seemed to capture How it Happened, as Private Edwin Underhill’s title proclaimed—an argument not often made for poetry. Grace Mary Golden’s Backgrounds (1917), for example, was praised for being “adept at making photographs of atmospheres,” for turning something ineffable into a concrete image. Poets responded to this tension by commenting on photographs in their poems, as in John Drinkwater’s “On the Picture of a Private Soldier Who Had Gained a Victoria Cross.” 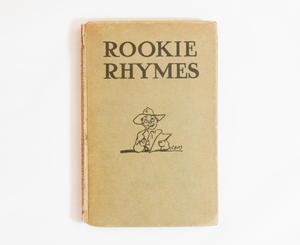 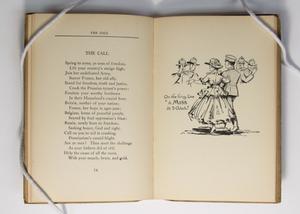 Robert Walter Campbell, born 1876, served with the Royal Scots Fusiliers in the Boer War (1899 to 1902), and then again with the 5th battalion in Gallipoli (1914) in the Great War. This second tour gave him the material for his poems in support of the war effort. Campbell wrote 25 lively poems and songs in Standard English for The Making of Micky McGhee. Some 20th century Scottish slang is sprinkled throughout. For example, in the title poem “He’d been used to sleeping in ‘Models’,” referring to a common lodging-house, and in the poem “The Advice of McPhee”, Campbell writes, “…kid you’re ill, [G]et a sick report and a Number Nine Pill.” Bingo, a popular game with soldiers, had an expression called “Doctor’s Orders – Nine.” During the war, a doctor handed out a No. 9 pill (strong laxative) to men who were malingerers.

The book’s illustrator, Howard K. Elcock, was known for his drawings in Sherlock Holmes stories printed in The Strand Magazine. Elcock provided 53 illustrations for Campbell’s book, which was published by George Allen & Unwin of London in 1916. Other clients of the publisher included Roald Dahl and J. R. R. Tolkien, suggesting the popular appeal of Campbell’s poems. The title page lists other works by Campbell, and the book concludes with a series of advertisements for other collections of war poetry, stories and drawings.

The copy of Making of Micky McGhee in UNT’s Special Collections includes an inscription by Campbell on the flyleaf, dated 1914, giving “A Little Advice.” (When Campbell refers to a “Subaltern,” he means a British army officer below the rank of captain, especially a second lieutenant.) Campbell writes:

If a Subaltern came to me and said “I want to get on Sir – can you tell me what to do?” I would say “Yes, my boy – love your brother officers, love your h. c. and love your men. Be as firm as ‘K’, as wise as Joffre, and as kind as “Bob”. Make “Duty’ your watchword; “Honour” your badge, and believe that you are It, that your platoon is It, your Colonel It, and your regiment the It, Which makes it the right of the line and the terror of the G______y world. RW Campbell (Reserve of Officers) 1914

Find The Making of Micky McGhee in the UNT Library Catalog. 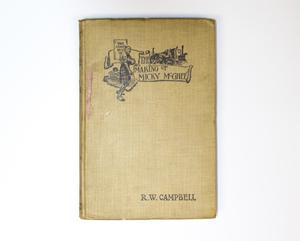 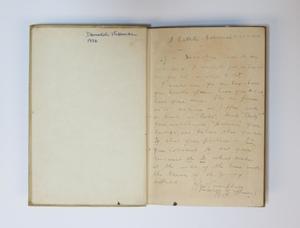 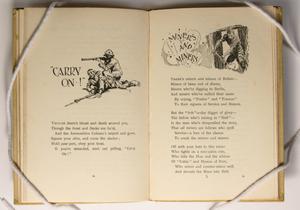 Find Vision of War in the UNT Library Catalog. 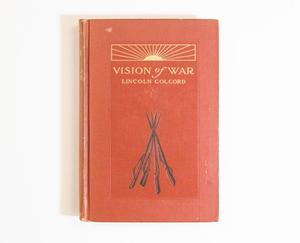 Find From an Outpost and Other Poems in the UNT Library Catalog. 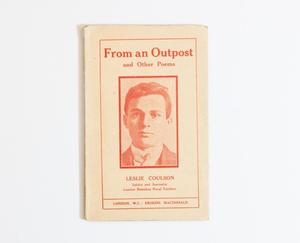 In “On the Picture of a Private Soldier Who Had Gained a Victoria Cross,” the author calls upon the theme of photography to apply pressure to its revelatory and documentary status. Photographs are not only signs. They are also indexes—that is, they are created by the conditions they record. This adds authority to their status as objective or unmediated by interpretive bias, but such objectivity is an illusion. The alignment of the documentary photo with objectivity forgets the deceptive nature of physical surfaces, how they might exclude or even repress the deeper conflicts of inner life expressed in a poem. In Drinkwater’s poem, the deceptive nature of physical appearance dialogues with the deceptive nature of accolades for valor and the sense of liberation from horrors of the past. Drinkwater thus registers an insight fundamental to new waves of psychoanalytic theory—that is, the burial of trauma constitutes a form of preservation, of intensification even, as opposed to conquest and erasure.

Find Swords and Ploughshares in the UNT Library Catalog. 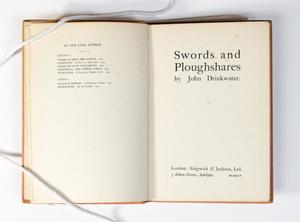 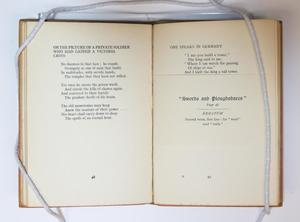 The author of this collection, Henry Field, served in World War I and died in service on July 1, 1916. The book includes poems written between 1912 and 1916. The preface at the beginning of the book is written by R.F. This could be Field’s mother, Ruth Field, but is more than likely his brother, Richard Field. In addition to supplying the preface, R.F. acts as an editor, making choices about which poems to include and which to omit. There are 26 poems in total, with subject matter ranging from WWI soldiers and death, to Christmas during the war, to unrequited love. There are also poems addressed to specific people, including J.C.F. (most likely Henry’s sister, Jessie). The book includes illustrations by Henry Field as well, which are reproduced lithographically. At the end of the book, the section “From a Pocket Sketch-Book” includes five lithographic prints of illustrations done by Field, mainly of other soldiers. There are also three other illustrations before this section, entitled “Wind” and “Sun” and one of a shepherd. In the preface, R.F. discusses how drawing and painting were “the mode of expression he [Henry] cared for most.”

Because this book was intended for “people who care for him” and to show people Henry’s “inner life,” a lot of care is taken with its printing and particularly with the reproduction of Field’s drawings. This care is signaled in the book’s physical features. The poems are printed on paper that is unusual for the period: the paper has vertical chain lines and a large watermark, implying that more money may have been spent on the manufacturing of this book because it was a memorial work. Through editorial interventions and care with making the physical artifact, Field’s family and publishers worked to give readers a portrait of what Field was like during his service in WWI.

Find Poems and Drawings in the UNT Library Catalog. 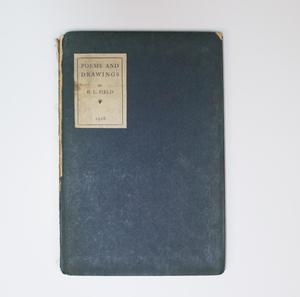 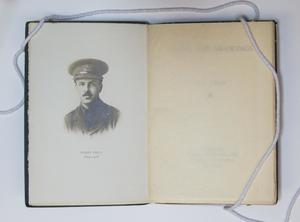 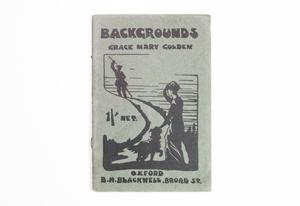 Our Hospital ABC with pictures by Joyce Dennys and verses by Hampden Gordon & M. G. Tindall is a children’s picture book about an army hospital run by ANZAC (Australian and New Zealand Army Corps), Britain & Canada. Each page, end leaf, end page, and the outside book covers were printed as full-page lithographs using large blocks of color. The white block text is printed in the same style as the pictures in red, blue, brown and occasionally green throughout the book; the end pages are plain gray with white silhouettes of people. The text of the verses are simple and in all capitals, but the content suggests this is not a children’s book: “N are the Nurses / The Right Sort of Wenches / To Look After Lads Who / Are Back from the Trenches.” Hampden Gordon and M. G. Tindall provided these delightful, sometimes bawdy verses, but it is the illustrations that steal the show. Isobel Dorothy Joyce Dennys (1893 – 1991) was an artist, illustrator, painter and nurse. Texture within the drawings used very small dots of color. John Lane, the publisher, contacted Dennys and asked if she would illustrate this book. Hampden Gordon and Joyce Dennys ended up collaborating on two humorous books of war time poetry, Our Hospital ABC and Rhymes of the Red Triangle. A ‘faux bookplate’ on the front end page reads “Not To Be Taken / Seriously,” reinforcing the humorous intent of the book.

The book was published in 1916 by John Lane of The Bodley Head, which took its name from the bust of Sir Thomas Bodley that sat above the shop door. The name of the printer that provided the lithography can be found in very tiny print on the back cover: William Griggs & Sons, Ltd. Lith., Peckham, London William Griggs and Sons in 1916 in Peckham performed the lithography. William Griggs (1832 – 1911) was the inventor of a photo-chromo-lithographic process and was a pioneer in the use of color printing.

Find Our Hospital in the UNT Library Catalog. 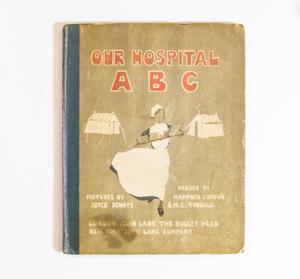 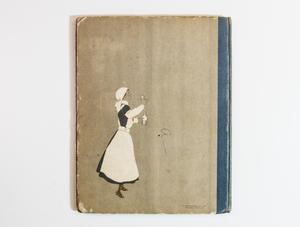 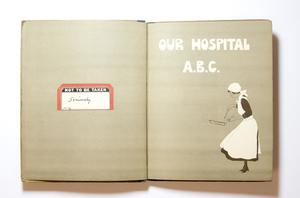 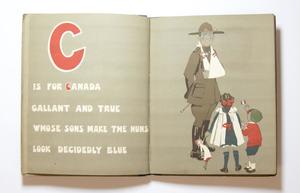 Find History and Rhymes of the Lost Battalion in the UNT Library Catalog. 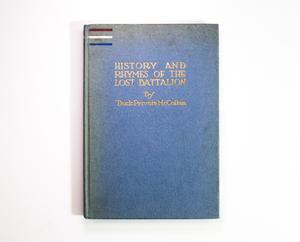 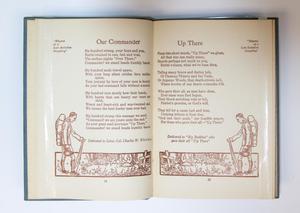 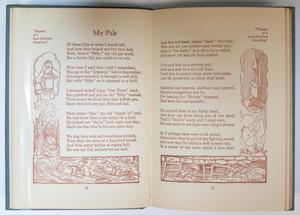 In 1917, poet and literary critic Herbert Read co-founded the avant-garde quarterly journal Arts and Letters, which in 1919 published Read’s book Naked Warriors. (The volume’s first section “Kneeshaw Goes to War” originally appeared in Arts and Letters, as noted in the contents.) This sixty-page volume of poetry and prose explores the arc of the British soldier’s combat experience in World War I. Read, who served in the war and was awarded both the Distinguished Service Order and the Military Cross, includes an epigraph before each section, visually separating sections that are joined by a thematic progression rather than common characters. Before the contents page, readers encounter a six-line poem entitled “Parody of a Forgotten Beauty” and a one-paragraph preface in which Read encourages his generation to “strive to create a beauty where hitherto it has had no absolute existence” (5). This desire is reflected in the cover illustration, thought to be the work of artist Wyndham Lewis. The central figure employs Vorticism, an early twentieth-century British art movement using a form of urban cubism to express the dynamism of the modern world. The book is bound in textured, tan paper boards printed in striking red, featuring the title, Vorticist illustration, author, and price (“three shillings net”) on the front cover, and information on the journal Arts and Letters on the back cover. The front leaf of this copy is inscribed “T. A. Lamb, from W. R. Childe. 8.4.1919” under the title. Considering the place of publication and publisher, we can speculate that this copy was given to T. A. Lamb, author of T.N.T. Tales (Oxford, 1919)—a collection of anecdotes describing the work of munitionettes at the Barnbow shell-filling factory near Leeds—by Wilfred Rowland Childe, editor of Oxford Poetry in 1916-1917 and a contributor to Arts and Letters. Page 21 of this copy shows a handwritten emendation to the epigraph, attributing it to “H. D.” rather than “H. R.”; this is the same as some other extant copies. The final section, “Killed in Action,” is a prose selection from an unfinished novel and ends with a fleuron, visually marking the conclusion of the work. 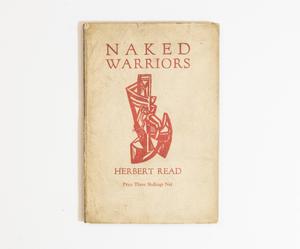 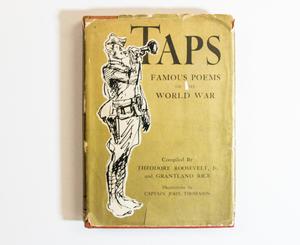 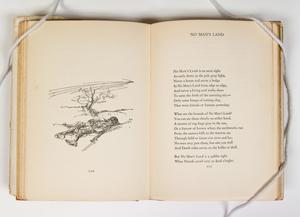 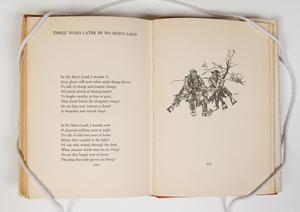 Find How It Happened in the UNT Library Catalog. 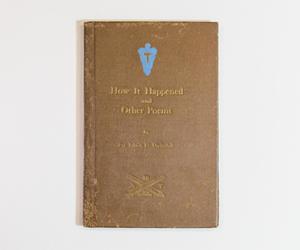 This image in Echoes from France by Amy Robbins Ware, an American nurse in France during WWI, demonstrates the kind of tensions generated by the coexistence of photographs and text. Although the book contains no photographs of abject gore, it does feature this photo of a woman with a gas mask as a haunting reminder of such horror and an effacement of the familiar, such that the woman now wears the large dark eyes and proboscis reminiscent of insect life. The text at the bottom works against the tone of estrangement by way of the domesticating rhetoric of “little tin derby” in the place of “helmet.” The diminutive qualifier is not supported by the photo and so suggests a note of endearment and thereby emotional mastery. Similarly the poem to the left of the photograph turns its focus from the destructive power of the “Gothas,” the heavy bombers of the German Luftstreitkräfte, to “Life’s great adventure” and nostalgic invocations, however fleeting their comforts. Whereas the reassurance of a human face, no less real than the uniform before us, lies beneath the mask in the photograph, the terror of war lies beneath the rhetorical surface of the poem, whose imagistic force is for the most part diffused by familiarity of diction and detail. Both the visual and the verbal representations take on layers of resonance—the correlative to a psyche under pressure—by virtue of conflicts sharpened by the book’s physical proximities.

Find Echoes From France in the UNT Library Catalog. 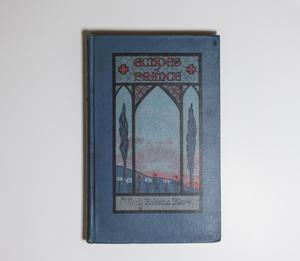 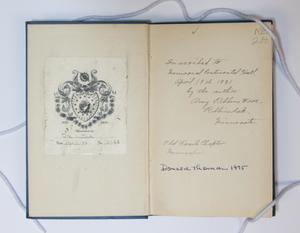 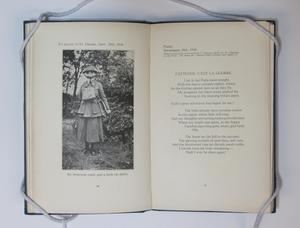