The Lost Generation: World War I Poetry: Women and War

Women from Britain, America, and across Europe were central to the war effort. Many women enlisted in non-combat roles, becoming military nurses and clerical staff; many more were conscripted to fill jobs at home vacated by soldiers, ranging from skilled positions as teachers to jobs in munitions factories. Established women poets published verse on the war—Lowell’s Men, Women and Ghosts (1919) contains a section titled “War Pictures”—but many lesser-known women dedicated whole volumes to the subject. These collections often comment on the vast divide between women’s domestic life at home and the soldier’s fate on the field. Emily Caroline Oliphant opens “Socks” bluntly: “The women are left at home; the men to glory or death / Are called in glorious warfare” (p. 5). While Oliphant turns this divide to dark comedy—women “sit at home in the ingle, and knit for the soldiers—socks”—her contemporaries were more likely to celebrate women’s supporting role and lament the personal and national losses occasioned by the war.

Find The Flying Parliament and Other Poems in the UNT Library Catalog. 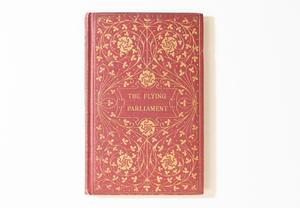 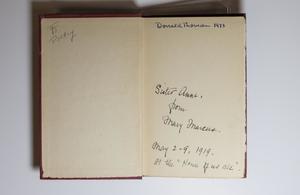 Vera Brittain joined the British Voluntary Aid Detachment, or V.A.D., in 1915 to work as a nurse; she served in London, France and Malta during the war. Poems of War and After reprints the poems originally published in Brittain’s Verses of a V.A.D. (1918). This earlier volume was dedicated to her fiancé and fellow poet Roland Leighton, who died in the war along with Brittain’s brother Edward and several close friends, whose letters Brittain quotes in her memoir Testament of Youth (1933). In her earlier V.A.D. poems, Brittain provides precise dates and locations, allowing the reader to follow her movements and losses, from “A Military Hospital” in London 1916, to “In Memoriam G.R.Y.T. (Killed in action at Monchy-le-Preux, April 23rd, 1917)” written in Malta, to “Sic Transit—(V.R., Died of Wounds, June 9th, 1917)” dated London, June 1917. Brittain’s poems reflect the pain of surviving one’s friends and relations, a pain expressed in her memory of blue-grey eyes, a youthful gait, “of intimacy sweet though scarce begun” (p. 29).

Find Poems of the War and After in the UNT Library Catalog. 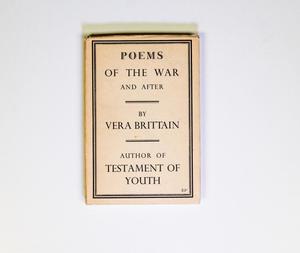 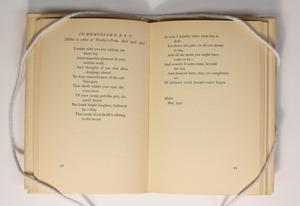 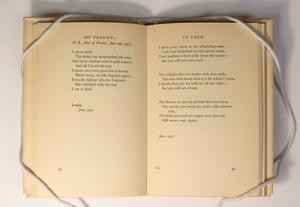 Find Somewhere in France: And Other Poems in the UNT Library Catalog. 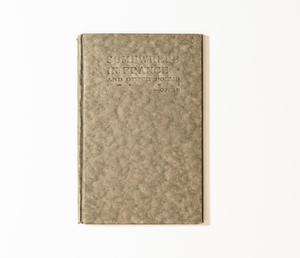 English poet and novelist Maurice Hewlett (1861-1923) is rarely studied today, though his work around World War I often promoted socialism and universal suffrage. Perhaps the latter informs this collection, a series of poems told from the point of view of a woman, the eponymous village wife. As Hewlett notes in his introduction, World War I is “the greatest disaster of recorded time” and the village wife’s “reproaches strike at the heart of Mankind” (p. b1). By placing those reproaches in a women’s perspective, Hewlett attempts to chart the human toll of war, to show that soldiers are far from the only people affected. Thus, given the narrator and the subject matter, The Village Wife’s Lament, despite being written by a man, is included in the Women On War section of this exhibit.

The book itself is a slim volume of only sixty-one pages; it lacks a table of contents and features six numbered cantos. Each canto contains an average of three to six poems (also titled by number), and the poems themselves consist of rhyming quatrains or octets. While the bulk of the book is comprised of wood pulp paper, the publisher’s catalogue is printed on cheaper material and appended in the back. The catalogue includes plays, poetry collections, travelogues, books on craft, thirteen works by Henry James, and a section of “Two-Shilling Novels,” revealing Martin Secker to be a literary publisher with a commercial bent. Throughout, the book’s pages are cut poorly and glued unevenly. Yet, the volume’s poor production does little to lessen the impact of the words printed within: As the village wife laments the sight of mothers crying over their sons, she also condemns their shared grief: “We only cry, Let mine not die— / No thought for whom he slay” (p. 51).

Find The Village Wife’s Lament in the UNT Library Catalog. 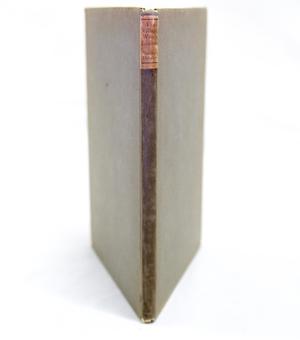 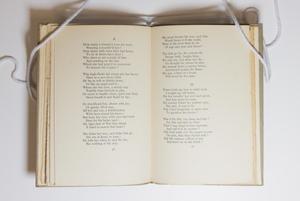 Find More Songs of Angus and Others in the UNT Library Catalog. 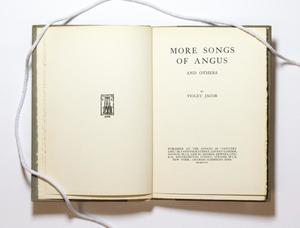 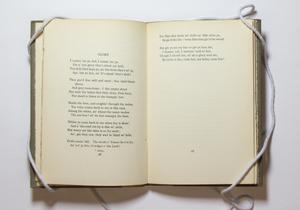 Amy Lowell’s Men, Women, and Ghosts, per her own preface, is meant to be an authentic window into the experience of WWI. It is a collection of 30 poems that had been published five times before this 1919 impression. The reprinting was made possible by electrotype. It was published in New York, but an earlier printing where the electrotype was produced occurred in Norwood, Massachusetts.

In the preface Lowell discusses which poems she chose to include in the collection. She excludes “purely lyrical poems” (ix) because she is more concerned with experimenting with vers libre, or free verse that does not subscribe to standardized rhyming and metrical schemes. Lowell classifies many of her poems as “polyphonic prose” and was a forerunner of experimentation with the prose poem in English. Many of her poems in the collection have elements of prose, including “Pickthorn Manor” a story about a woman whose sweetheart is on the front lines. Lowell also constructs poems as one would a musical number, as in “Stravinsky’s Three Pieces ‘Grotesques’, For String”. There are many poems about impression and perception, including “Spring Day” and “Towns in Colour.”

The collection is divided into five sections: “Figurines In Old Saxe”, “Bronze Tablets” (which Lowell sees as being most directly about war), “War Pictures”, “The Overgrown Pasture”, and “Clocks Tick a Century”. The multiple printings of this collection, and the production of electrotype plates to make reprinting easy, hint that this was a widely-read collection of poetry. UNT’s copy itself also shows signs that it was given as a gift: there is a Christmas card to “Dear Florence” tucked away in the volume. Lowell’s experimentation with free verse and her aim for a depiction of what life was like for women and men during WWI was most likely a success in her contemporary moment.

Find Men, Women and Ghosts and Sword Blades and Poppy Seed in the UNT Library Catalog. 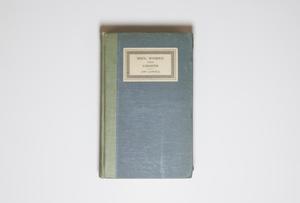 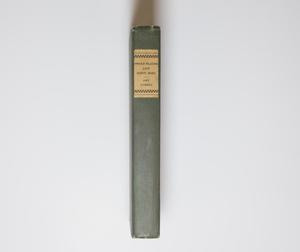 Find The Poems of Alice Meynell: Complete Edition in the UNT Library Catalog. 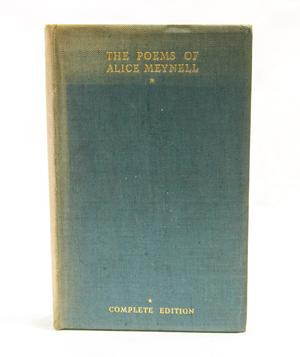 At 10 pages long, Edna St. Vincent Millay’s There Are No Islands, Any More is a book containing only one poem. Written on the cusp of World War II, “in Passion and in Deep Concern for England, France and My Own Country,” the poem chides the isolationist stance still prevalent among many Americans amidst the growing threat of Fascism and Nazism. Millay’s patriotism and support of the war contrasts her previous role as a pacifist in World War I, and is epitomized by the book’s copyright page, which bears a statement by Millay: “This poem, written by me in the cause of democracy, has been printed and distributed with my permission, free of royalty to me or profit to my publishers. All proceeds from the sale of this book will be turned over to an established war relief agency.”

Published by Harper & Brothers Publishers (now HarperCollins) and printed and bound by the Haddon Craftsmen in Camden, New Jersey, UNT’s copy is a first edition. Publication and printing information is displayed between two small stars on the last page of the book, along with a statement regarding the typeface (Bulmer), and that it was set by hand at the Golden Hind Press in Madison, New Jersey. The detail-oriented, artisanal quality of the book’s printing is antithetical to the centralized, mass-produced style of printing that had become popular with the invention of the Linotype machine in the late 1800s. Millay’s decision to have the book produced in this way without earning any profit of her own reinforces her dedication to the prevention of Fascism.

Find “There Are No Islands, Any More” in the UNT Library Catalog. 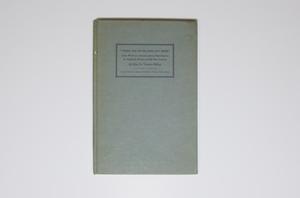 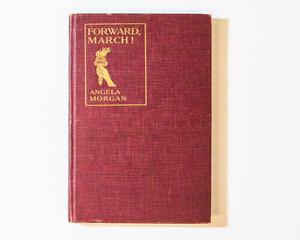 While not every poem in Emily Caroline Oliphant’s Socks directly concerns the role of women on the home front of World War I, the most noteworthy of the book’s 27 poems, “Socks,” details the almost laughable frustration of the limited contributions a woman could make in contrast to her husband’s sacrifices:

“Tis little a woman can do when fighting is to the fore; True, she can send her menkind now as in days of yore; … But every minute to spare she knits for her soldier—socks.”

The book’s title page bears the information that it was published in Blairgowrie, a burgh in Scotland, and printed in 1915 at the Advertiser Office, a local newspaper office. The following page denotes that it was sold for the Prince of Wales’ National Relief fund, which was developed in order to aid the wives and families of those serving in the war. Bound in forest-green cloth with three diagonal stripes across the top right corner in cherry red, gold, and navy blue, the 34-page book is an unusual format (about 10” x 7.5”) and was sold for one shilling. Choosing to bind the book in a color reminiscent of the soldiers’ uniforms and stripes resembling the British flag reinforces its nationalistic purpose.

Despite the obvious humor of the title poem, the book signals its serious intentions on the title page epigraph. Printed in italics is the phrase “Moriendo Vivo” which, translated from Latin to English means, “In dying I live.” This idiom captures not only what it must have felt like to be a woman in the midst of World War I, but the guilt of any person—civilian or soldier—who evaded death in such a catastrophic event. 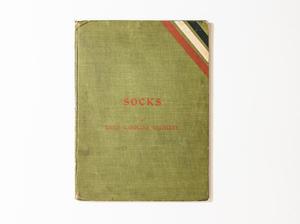 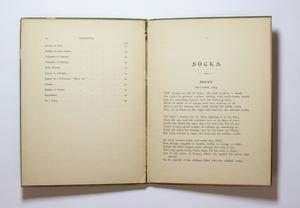 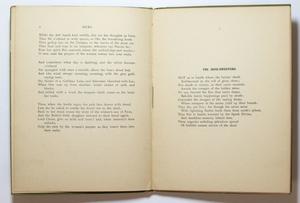 Find Valour and Vision in the UNT Library Catalog. 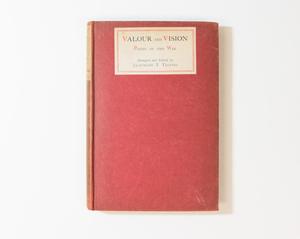 Find Flower of Youth in the UNT Library Catalog. 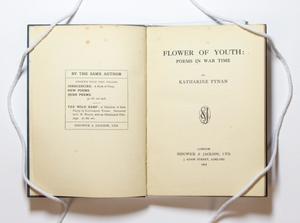 Find Fifes and Drums in the UNT Library Catalog. 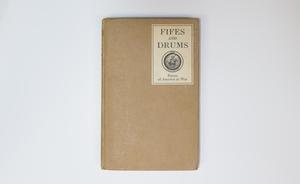 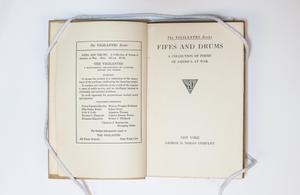