The Lost Generation: World War I Poetry: Reflections on Peace and War

During the Great War and in its aftermath, many poets expressed hopes for an eventual and lasting peace. Volumes composed during WWI often personified Peace as the antithesis to War, as in Paul Williamson’s “Plan for Peace,” or as a “faithful sentinel” who lay “martyred on the plain” in G. O. Warren’s The Sword. Volumes published after the Treaty of Versailles ended the conflict in June 1919 might celebrate the “New Peace,” as with Cease Firing: Fifty Poems of the New Peace (1930), a collection of poems designed for reading and recitation aloud. Other volumes, such as Edward Blunden’s The Shepherd and other poems of peace and war (1922), turn the conventional trajectory from war to peace on its head. Both of these retrospective volumes establish their authority by invoking famous soldier poets: Anna Whittaker Roussel, the compiler of Cease Firing, provides an epigraph from Siegfried Sassoon’s Counter Attack, while Blunden inscribes his volume to Sassoon, his close friend and fellow soldier poet.

Find Images of Desire in the UNT Library Catalog. 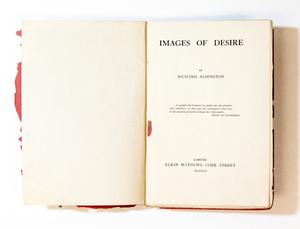 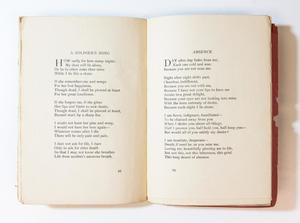 Find Poems of Peace and War in the UNT Library Catalog. 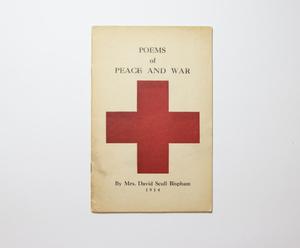 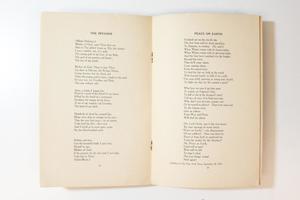 Find The Shepherd: And Other Poems of Peace and War in the UNT Library Catalog. 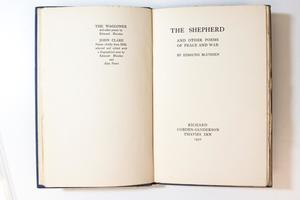 Find The Bells of Peace in the UNT Library Catalog. 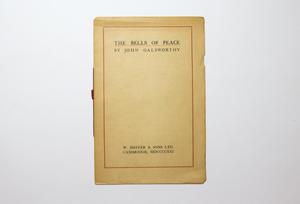 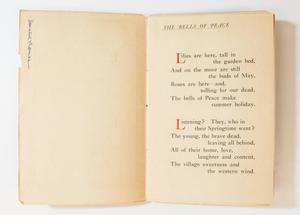 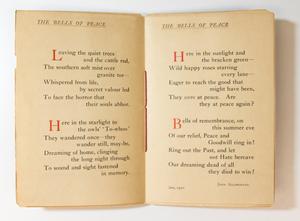 Find The Heart of Peace: And Other Poems in the UNT Library Catalog. 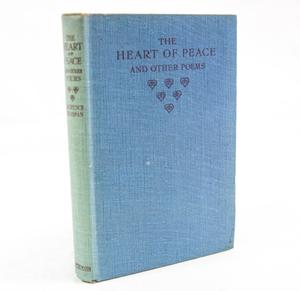 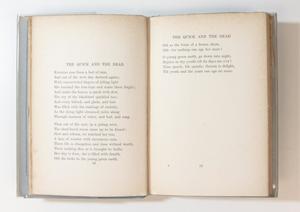 Francis Ledwidge (1887-1917) was born in Slane, a small town 30 miles north of Dublin, and died in the Third Battle of Ypres in Belgium in 1917. Ledwidge supported the movement for Irish home rule before enlisting in Lord Dunsany’s army regiment in 1914. The poems collected here, published in the last year of Ledwidge’s life and introduced by Dunsany, are organized in categories that reflect Ledwidge’s experience of the war—“In Barracks,” “In Camp,” “At Sea,” “In Serbia,” “In Greece,” “In Hospital in Egypt,” and “In Barracks” a second time. The poems themselves, however, have very little to say about the war, instead focusing on Irish locales like “heights of Crockaharna” (a rock formation near Slane) or Crewbawn (an Irish town on the River Boyne), but more often on old desires, lost loves, distant bird songs, and the drone of a night beetle’s wings. The surreal, abstract imagery of the poems jars with the concrete wartime locations of the headings. The result is ominous and unsettling, a strained peace embedded in the experience of war.

Find Songs of Peace in the UNT Library Catalog. 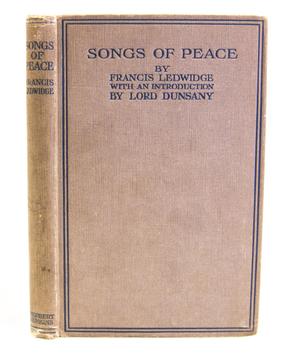 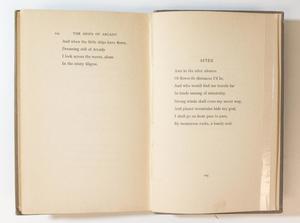 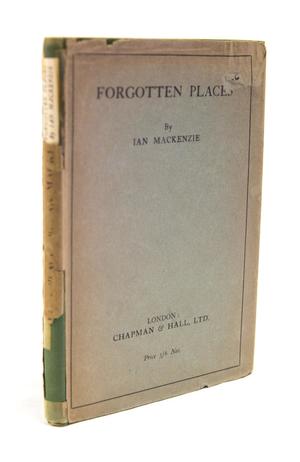 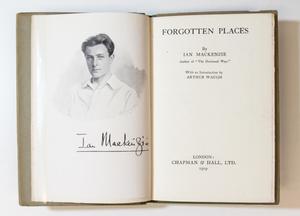 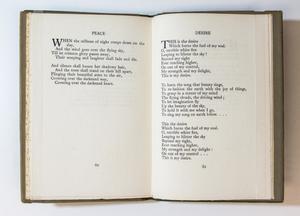 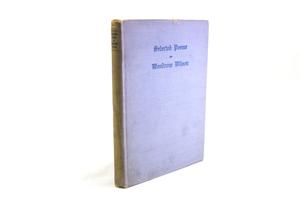 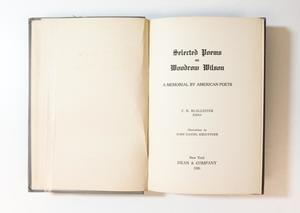 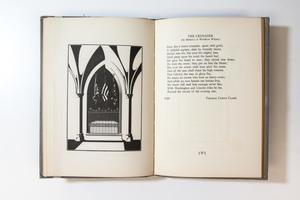 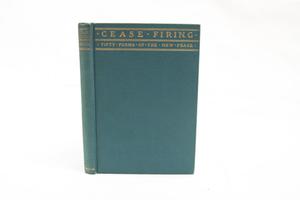 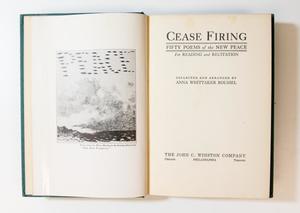 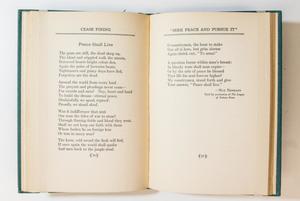 Lady Margaret Sackville was a British poet born on 24 December 1881 in Mayfair, London. Her talents appeared early on her life: at six she wrote in verse and at sixteen she performed on the stage.

The book’s history of ownership is revealed through a bookplate and a signature on the front endsheet. The bookplate bears the name of the first owner, William Marchbank, while the signature reveals the second owner Donald Thomas. The book is bound with light brown cloth on the spine over dark brown boards, and is printed on handmade woven paper, something that is quite unusual in 1919. Physically, the book is in excellent condition, and it does not appear that its first owner actually read the book: the leaves remain uncut, meaning that the pages are joined together at the top as they were when the large sheet of paper was folded to make the individual gatherings of the book.

Sackville divided her book into three sections, forging the first two about home and peace, while the third communicates how civilians at home depict the warfare. The poems in the first section portray nature in highly metaphorical language which lends a dreamlike quality to the poems. By contrast, the poems in the second section are written in dramatic style using stage directions and character tags. In the third section, Sackville begins with short poems that use themes of courage, bravery and patriotism, but the section concludes with poems on the theme of death and massacres which dominate the war. Sackville’s volume thus implicitly advocates for peace even as it accedes to the patriotic view of war. 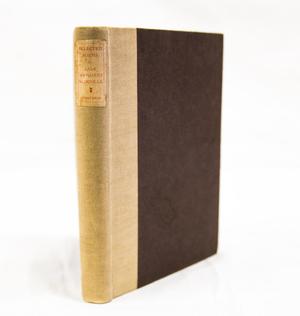 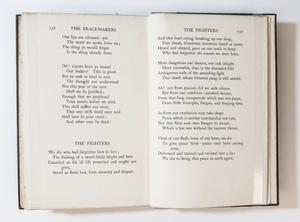 Find The Sword in the UNT Library Catalog. 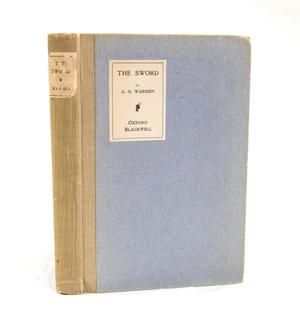 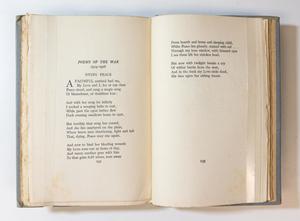 Find Lyrics of War and Peace in the UNT Library Catalog. 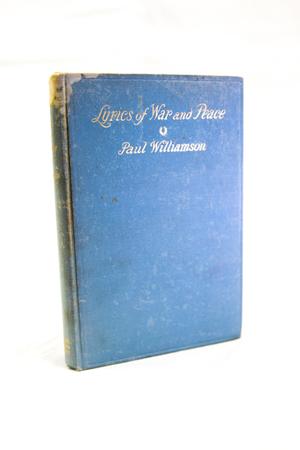 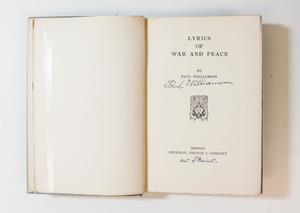