In World War I, as in many wars before and since, serving the cause and supporting the war effort was by definition a patriotic act, one that brought honor to heroes on the front, and comfort and a sense of security to those at home. While solider poets confronted the disjunction between patriotic optimism and what they experienced in the trenches, popular poetry celebrated the service and sacrifice of, as one anthology put it, “red blooded men and women” who have a habit of “looking life straight in the eye.” Verse collected in patriotic and propagandistic collections was often written in popular short forms—songs, ballads, ditties, “toasts,” and sonnets— and was distributed to servicemen in newspapers, magazines and pamphlets before it was collected in book form.

This collection of short poems by various authors was produced early in the war, and advertises itself as the first collection of poems formed during the conflict itself. The book’s introduction celebrates poetry as particularly formed to “uplift the hearts of the people” and “steel men’s hearts before battle.” Some of the poetry is explicitly inspirational and sentimental, while other poems treat specific political events. For example, “The Answer” by Ian Colvin (p. 15-17) treats Foreign Secretary Edward Grey’s refusal to bargain with Germany over Belgium’s status as a neutral country. Poems early in the volume tend to explain the origins of the conflict; poems later in the volume, such as “The Call,” target young men who can be encouraged to enlist. The book as a whole, as with many books in this category, might be labeled “inspirational literature”—that is, poetry intended to inspire readers with a spirit of “splendid courage and heroic self-sacrifice.” Perhaps to compensate for this message, the book also advertises that the “entire profits” from its sale will go to the Prince of Wales National Relief Fund, a charity that provided aid to wives, families and dependents of soldiers on active duty or who died in the war.

Published in the fall of 1914, just a month after Britain joined World War I, Songs and Sonnets for England in War Time reprints poems from a variety of newspapers and magazines. These are meant to inspire the nation and its individual subjects to victory and greatness in time of war. The volume’s cover is made of a grey wrapper that is not attached to the spine but folded over thick cardstock. Printed in red, the cover portrays Justica Britannia enthroned with a drawn sword raised in one hand and the scales of justice in the other, representing Britain’s justness and might. The title page features an epigraph by Sir Walter Scott, and both the unattributed introduction and the publisher’s note by John Lane stress that patriotism can be inspired by verse for those called to serve and for those on the home front. Reinforcing this patriotic bent, the back cover and the inside front cover proclaim that the book’s profits will be donated to the Prince of Wales’ National Relief Fund, a motivation for readers to patriotically buy the volume. The publisher’s note claims Songs and Sonnets was unique in collecting war-related verse produced and printed during the conflict, and it proposes to make this the first of a series, although this does not seem to have happened. Presented chronologically by original publication date, each entry concludes with the place of the poem’s original publication. This organization takes readers through the war’s first weeks. There are only two exceptions to this ordering schema, the very first and last pieces. Both are written by William Watson, author of Adventures of a Despatch Rider (1915) and The Man Who Saw, and other poems arising out of the War (1917), whose poetry is also quoted in the introduction.

Find Songs and Sonnets for England in War Time in the UNT Library Catalog. 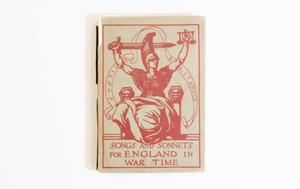 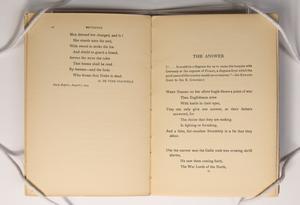 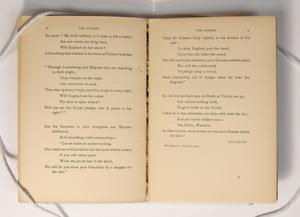 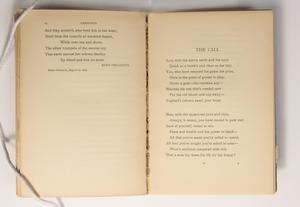 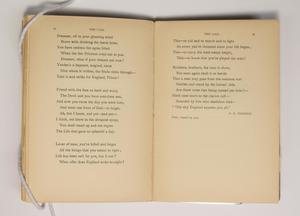 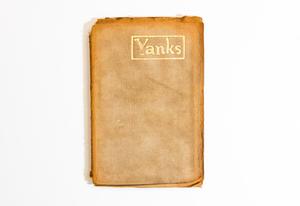 This edition of Patriotic Toasts was published in 1917 by Forbes and Company in Chicago. Each page has a lithographic decorative blue border surrounding the printed text, and the dense cardboard cover contains a stoic depiction of Uncle Sam carrying an American flag, reinforcing the book’s self-proclaimed patriotism. The author, Fred Emerson Brooks, a popular 19th century poet, wrote several books of “toasts” – short poems likely meant to be read aloud in social gatherings. A notice in the back of this volume advertises Brooks’s other publications, including the comically titled Cream Toasts and Buttered Toasts, with a series of quotes from major newspapers attesting to Brooks’s sparkling wit. The collection of poems in this book captures the vigor of the American spirit at the time of its entry into World War I. Poems such as “Old Glory” and “Liberty’s Banner” are dense with the nationalist rhetoric that would eventually lose much of its appeal in the years to come. Other poems, like “To Our Own Good Germans,” exemplify the propagandizing attempts to vilify the people of Germany. When reading these poems, one can easily envision the host of a dinner party at the turn of the 20th century lifting his glass at the end of a spirited speech. 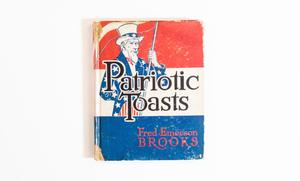 Frank Bernard Camp, an American poet born in 1882, authored American Soldier Ballads, a collection of poetry heavy with patriotic themes. The book itself is small with an ocher cover, containing eight page gatherings. There are no illustrations, but the cover displays an image of soldiers sitting around a campfire, seemingly telling stories. The book contains minimal damage, other than a fingerprint inkblot on page 21 that might have occurred during the printing process. Published in Los Angeles in 1917 by Geo. Rice & Sons, the book is dedicated to H.A. Greene, a Major General of the United States Army. The author explains his intention for the collection in this dedication: he has written for “the benefit of all of Uncle Sam’s soldiers,” attesting to his respect for Greene who formed the 91st or “Wild West Division” of the US Army. There are forty-nine ballads, ranging from the civilian’s to the soldier’s perspective but with consistently patriotic subject matter conveyed in titles like “The Love of Country,” and “When We Make the Kaiser Run.” The ballad “Not Till Then” contains a headnote speculating on when the Germans will quit fighting. According to Camp, this won’t occur until Americans start fighting “with our hands, not our lips” (40). The ballads gesture to sadness caused by the soldiers’ absence, but the more prevalent focus is on their honorable sacrifice in fighting for America’s freedom. In his foreword, Camp claims his ballads might not be perfect stylistically, but that he is writing in honor of the American soldier: he claims the verses are “not artificial, not socialistic” but rather “conveying a truth” by “touching the real things of the present day.” 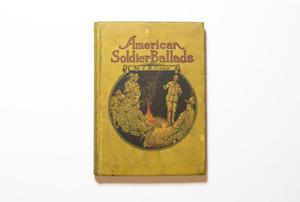 Find Songs of Men: An Anthology in the UNT Library Catalog. 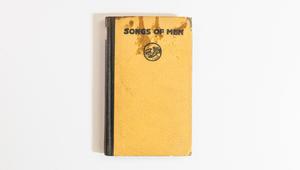 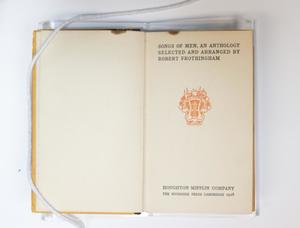 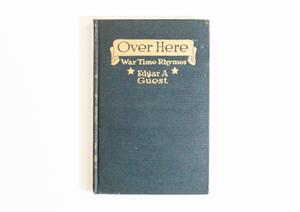 Find Peace and Patriotism in the UNT Library Catalog. 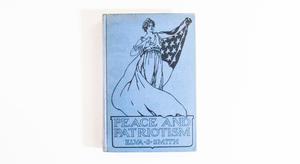