A Tour Through Their History: S. and J. Fuller

The production of paper dolls in Europe began in the 1790s. The dolls were illustrated with their underclothes on and pasted on cardboard for support. The joints of each were connected by threads to the body so that the limbs could move into various postures by manipulating a coordinating thread attached in the back. Dresses and hats accompanied each doll. The fashion-conscious French enthusiastically welcomed these new paper dolls from London. A French fashion magazine advertised the dolls as so appealing that both young girls and grown women would enjoy them.

The London toy novelty firm, S. & J. Fuller, produced a series of books between 1810 and 1816 that came with a paper doll and various outfits, hand-colored and cut-out. The small books told stories in verse, centered on a character represented by the paper doll. The character wore a specific outfit in each episode of the verse; thus, as the book was read, the doll was supposed to be dressed in the appropriate attire. The books would often tell morality tales aimed at children. As an example, in Little Fanny, Fanny is at first an “idle” girl whose chief activity is playing with her dolls. When her mother refuses to accompany her to the park, she escapes with her maid and is soon robbed of her clothes. She appears next as a beggar girl and slowly works her way out of poverty and into different outfits until she is able to return to her mother. In the end, Fanny has learned her lesson and appears reading a book instead of playing with a doll.

The Fuller paper doll design is different than the original paper dolls of the 1790s. Instead of having an entire body, the doll consists of only a head and neck. The neck serves as a tab that slides into slots in the backs of the outfits.

The books were quite expensive compared to other colored children’s books. Selling from five to eight shillings, they would have been marketed toward the upper class. 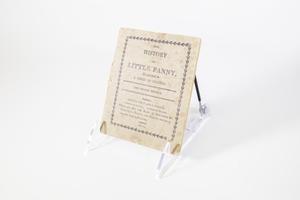