Alex Moore (1899 - 1989) was a blues pianist who played everywhere from local chili parlors to touring Europe. Known as Alex “Blues Artist” Moore, he began performing in 1929, and recorded many singles such as “From North Dallas to the East Side” and “Blue Boomer Blues,” as well as two albums titled “Alex Moore in Europe” and “Whistling Alex Moore.” Moore was honored by the Eva Jessye Afro-American Music Collection at the University of Michigan in 1983, and had a day proclaimed Alex Moore day by Dallas Mayor A. Starke Taylor in 1983 and 1984. Jimmy Smith (1926 - unknown) grew up with music as an integral part of his life. He began playing piano at a young age, and played in the styles of jazz, rhythm and blues, and spirituals. His flexibility of style allowed Smith to play with such greats as B.B. King, Ivory Joe Hunter, and Gate Mouth Brown. From 1942 through the mid-1960s, Smith led the Red Calhoun Orchestra. In his later life he spent more time working with the church, and served as Musical Director for the St. Paul United Methodist Church Male Chorus and as Assistant Musician of the Church.

Osceola Mays (1909 - 2004) told the stories of her life, growing up in rural East Texas through segregation, through the traditions of song and poetry learned from her mother, Azalene Douglas, and grandmother, Laura Walker. Mays committed her family’s songs and poems to memory to continue the oral story telling tradition, but many were compiled into the book The Life and Poems of Osceola Mays. Mays shared her gift through performances and recordings around Texas, and was invited to travel to France to participate in the “Texas in Paris” tour in 1989. Mays was inducted into the Texas Black Women’s Hall of Fame by the Museum of African American Life and Culture in 1986.

Frances “Frann” Gaddison (1925 - 1996) was a jazz pianist and alto saxophone player. She graduated from Lincoln High School in Dallas, which is known for producing a number of jazz greats. During her career, as a woman in a male dominated genre, many of her contributions were overlooked, but her accomplishments are notable. In her 20s she played alto sax in three all-female orchestras, the All-Star Girl Orchestra, the International Sweethearts of Rhythm, and the Darlings of Rhythm. She later played piano with Lionel Hampton’s band, appeared at Carnegie Hall, and accompanied Billie Holiday, Duke Ellington, Betty Carter, Dinah Washington, Eddie “Lock-jaw” Davis, and many more. The majority of her career was spent in New York, but she returned to Dallas in the late 1970s, playing small venues until her health declined.

More information about Frann Gaddison can be found on the Texas State Historical Association Handbook of Texas. 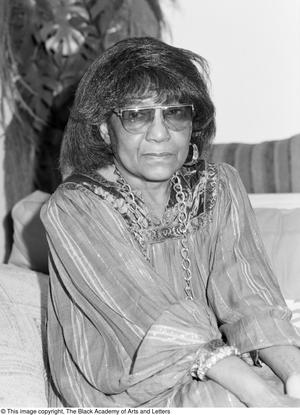 Dorothy Mayes Starks (1914 - 2004) started dancing at the age of 6 with the Ellen B. Moore Theater. As part of this dance troupe, Starks danced in cities around North America, and Moore’s mentorship led Starks to pursue her dancing career. Starks danced on Broadway with Louis Armstrong, at the Apollo Theater, the New Grand Terrace in Chicago, and was part of the dancing duo Morrison and Mayes. Starks career allowed her to befriend great artists such as Lena Horn, Josephine Baker and Duke Ellington, to name a few. After Starks’ partner decided to retire from dancing, Starks moved back to her home of Dallas where she joined the St. Paul United Methodist Church, opened the Open-Door Café, and donated her time and talents to supporting the Maria Morgan Branch YWCA. 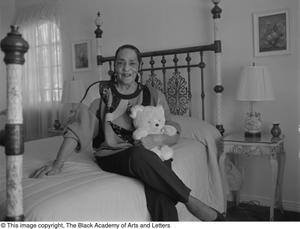 Al “Big Al” Dupree (1923 - 2003), the famous jazz musician, took to music at an early age, taking on the piano, saxophone, and clarinet. Dupree began playing gigs in the late 1930s with the John R. Davis and His Dandies. These performances took place in Deep Ellum, which was a breeding ground for notable blues and jazz musicians. At the age of 16, Dupree left the group to attend Xavier University in New Orleans where he majored in music. Dupree entered the military in World War II, and returned to Dallas after the war. Dupree continued to play regularly in Dallas as the front man of the Heat Waves of Swing, went on tour with artists like T-Bone Walker and Pee Wee Crayton. After Dupree decided to stop touring, he returned to Dallas and formed the Dreamers, who had a long stay at the Theatre Lounge, and released his first album in 1995. In addition to his music career, Dupree worked for the US Postal Service for 30 years, and was a 32-degree Mason.

Allison Tucker (1926 - ) is a native of Houston, who grew up with music in his family. Tucker’s older brother was an accomplished trumpet player, which inspired Tucker to take up both the saxophone and the trumpet. Tucker graduated from Texas Southern University, performing with various groups including the Hit Parade while in school. Tucker decided to go into teaching music, and in 1957 he began teaching at Lincoln High School where he taught for 25 years. He was determined to give economically disadvantaged students a chance for success, and saw potential in every student. Tucker’s determination and gift for teaching put Lincoln High School on the map as a producer of jazz greats like Bobbi Humphrey, William Jeffries, Bobby Patterson, Bo Miller, and many others. After his retirement from teaching, Tucker divided his time between teaching music classes at Dallas elementary and middle schools, and chronicling the history of jazz music, which including the work of many of his students. 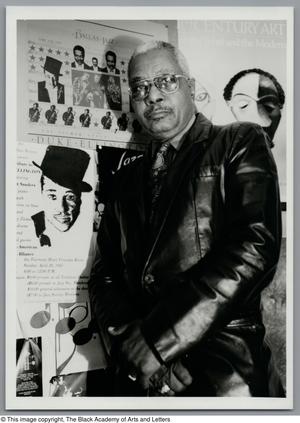