R.C. Hickman (1922 - 2007) worked as a photographer in the Army during World War I, which influenced his decision to become a photojournalist upon his return home. He spent his photography career documenting segregation and the Civil Rights Movement in Dallas, including the Mansfield school desegregation, visits from major Civil Rights Movement figures, and everyday inequalities of Dallas’s Black community. Hickman worked for major regional and local Black newspapers like the Kansas City Call, Dallas Star Post, and national publications like Jet and Ebony. Hickman worked with the NAACP for much of his career, utilizing his photographs as evidence in numerous cases fighting for racial justice. After Hickman’s retirement in the 1970s, he shared his knowledge of photography through lectures and workshops in Dallas schools. Hickman received many recognitions for his work in the Civil Rights Movement, and his work continues to be shared through archives and exhibitions.

James Thibodeaux (1911 - 2004) was born in Louisiana, but moved with his family to Dallas around 1920. After excelling in art in high school, his father sent him to New York to study art. He graduated from the Mechanics Institute, Society of Mechanics and Tradesmen in 1932, with a specialization in free-hand drawing. Thibodeaux remained in New York, experiencing the Harlem Renaissance, and living at the Harlem Branch YMCA, where he met prominent Black artists and intellectuals. He found a job at the WOR radio/television station, where he worked until retiring in 1977. In 1943, Thibodeaux was drafted to the US Army and served as the first Black artistic instructor in special services. After World War II, he pursued his art and theater career, exhibiting and performing in well-known galleries and theaters of the time, while also teaching art to young people. In 1980, Thibodeaux moved back to Dallas where he continued to create art until his death in 2004.

More information about James Thibodeaux can be found on the Texas State Historical Association Handbook of Texas. 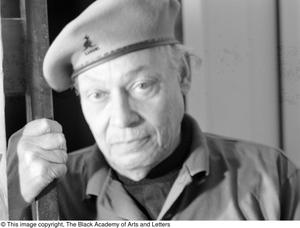 Willard Watson (1921 - 2995) served in the US Army during World War II, and upon his return took on various jobs to support himself and his artwork, including cotton picker, carpenter, cook, and tailor. He was well known for his homemade outfits, customized cars, and sculpture garden in his front yard. His work as an artist often includes found objects and utilizes everyday materials. Watson became a notable Dallas artist and an exemplar of Texas folk art. His works have been shown throughout Texas, including at the Dallas Museum of Art, the Museum of African-American Life and Culture, and the Witte Museum. Watson has also been featured in major Dallas and Texas publications such as D Magazine and Texas Monthly Magazine.

More information about Willard Watson can be found on the Texas State Historical Association Handbook to Texas. 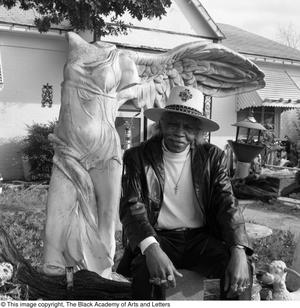 Laura Jean Lacy (1932 - ) grew up in Washington, DC, and was exposed at an early age to philosophical thoughts and writings of African-American intellectuals like Alain Lock and W.E.B. DuBois. With this exposure, it was easy for Lacy to embark upon a path that magnifies the history of her heritage. Lacy studied art in New York and Los Angeles. Her art work is inspired by creation myths, religious stories, the Civil Rights Movement, and African-American culture. In addition to studying art, Lacy studied Museum and Art Education, allowing her to take on the position of Curator of Education and Exhibitions at Dallas’s Museum of African-American Life and Culture in the late 1970s, and then Director of the African American Cultural Heritage Center of the Dallas Independent School District from 1977 through 1988. Lacy’s works are held by the Dallas Museum of Art as well as in many private collections, and her specially commissioned stained-glass windows decorate the sanctuary of St. Luke’s United Methodist Church in Dallas. In 1995 Lacy received the Women’s Caucus for Art Lifetime Achievement Award. 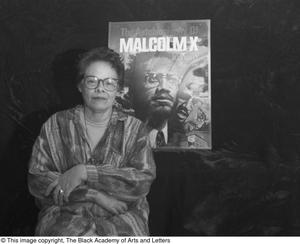 Deacon Eddie Moore (1913 - unknown) moved to Dallas from East Texas, in the 1940s. He was denied attendance to art school because of segregation, so he decided to teach himself. Moore lived in California for about 40 years, where he worked as a police officer, while pursuing his passion of painting. After retiring from the police force and moving back to Dallas, Moore became a Deacon at a local Baptist church, and began teaching himself the art of sculpture, which is his most well-known medium. His art works are typically small, featuring figures, and the subjects draw from life experiences, religion, and politics. He has become a well-known folk artist, with his works featured in the African American Museum of Art and Culture in Dallas, the Mississippi Museum of Art, and the Smithsonian Anacostia Community Museum. 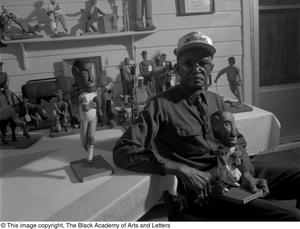 Reverend John Lewis Hunter (1905 - 1997) settled in Dallas in 1918, and found his calling to the Baptist Church in 1936. Rev. Hunter attended Southern Baptist School and Bishop College, and eventually became the senior minister at True Light Baptist Church. Even into his 90s, Rev. Hunter continued to work as a minister, but he also found a passion along the way for creating folk art. He began making small wooden sculptures at a young age, and continued to develop his skills. He used found tree limbs and the natural shapes of wood to assemble sculptures inspired by nature and religion. He painted these sculptures with bright colors, making the figures come alive. His works are in major collections and museums throughout the country. 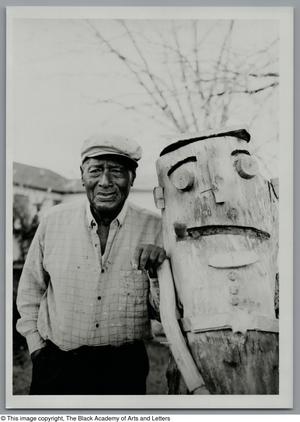